Halloween is a reminder of the futility of capturing precious moments. The best of them come in the chaos, and it’s difficult to hold onto a camera and chaos at the same time.

Our festivities began at Big Brother’s school parade. Hundreds of other parents, just like me, sat with their cameras ready to get those great shots of their kids passing by. I think we all got the same blur as the kids raced toward their classroom parties with little regard for posterity. I tried to get photos of some friends’ children, and never have I collected so many pictures of the backs of heads.

I think I did better than most, since my wife had no qualms about stepping into the parade route to make a human speed bump as Big Brother approached.

Next it was on to Buster’s preschool, for the recital portion of his Halloween party. It turns out, Buster is not an enthusiastic public singer or dancer. This, despite how readily he will do both at home, right in front of the TV, on fourth and goal.

What I missed recording:

We began our Trick or Treating with a group of a dozen kids, also known as the kind of chaos where I lose track of my camera. That’s when I have to start relying purely on memory, which is a shame because I feel like my storage is reaching its limit.

Our group of children and assorted parents kept together pretty well right up to the first house. After that, the group quickly pulled away from Buster, Big Man, and me. We continued on our own, free of the stress of keeping up with the big kids. 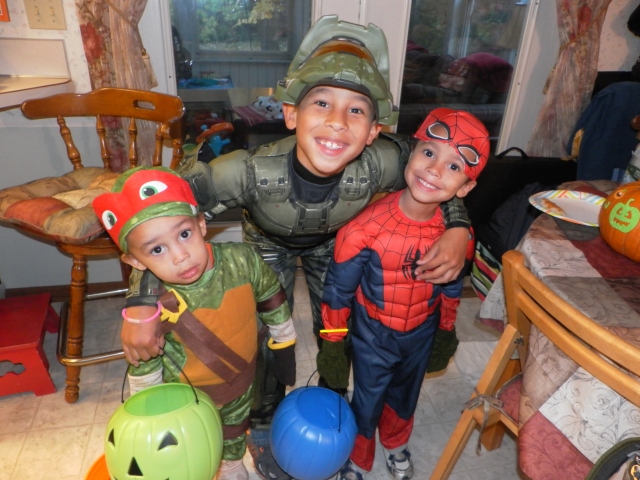 One quick shot before the chaos.

Together, we three shared Halloween moments I wish I could have recorded:

I’m happy I got what pictures and video I did. It’s all entertaining stuff. But those little moments that will stick with me I can’t replay for anyone else. All I can do is put them into words, and that doesn’t seem quite the same.

Last year we had light snow for Trick-or-Treating. This year, it rained, not so lightly. Less cold; more wet. But Halloween is not for the faint of heart, nor the dry of clothes, so we took it as it came.

This year, we had a large group to Trick-or-Treat, including other parents to manage the marauding hordes. My wife, who is in charge of manning the home base, handing out candy, and pouring the wine, asked me to heat up some cider in a crock pot before our crew set out foraging. It was a good idea. A warm beverage would hit the spot when we got back from our raiding in the rain.

Big Brother, two of his friends, myself, and another father got good and wet, as we went back out to brave the storm after dropping the others off at home.

I’ll always remember you this way, Batman: when you were still warm and dry.

Those last three kids will always remember this as the Halloween everybody stepped in a mud puddle. Nobody stepped in the same mud puddle, and some of us stepped in multiple puddles. None of our costumes included waterproof footwear.

A surprising number of people were out, considering the weather. Most had umbrellas, devices we rarely use and have never considered on Halloween. I began seeing more and more adults carrying paper coffee cups. It was like there was a Starbucks in the middle of our neighborhood suddenly.

The kids wanted to keep going; I couldn’t stop them, because, soaked as I was, I admired their tenacity. A little rain on their heads wasn’t going to stop them. A lot of rain on their candy might, though. Only when they noticed their candy getting wet did they entertain ideas of going home. Wet, cold skin is one thing, but children must keep their candy safe.

Eventually they agreed it would be irresponsible to risk the candy they already had to get a little more. We made our way home, not overlooking lit up houses on the way.

We got home, chilled and wet, but deserving the candy we’d collected, and most certainly a hot cup of cider. I went to the crock pot. Empty.

“Where did all the cider go?”

“Oh,” my wife replied. “I’ve been giving it out to the parents of Trick-or-Treaters.”

Welcome to the community Starbucks.

“People really liked it,” she added to sooth my disappointment. “One lady took five cups.” I wasn’t as soothed as she thought I’d be by the success of her Halloween largess. “We’ve got more cold cider in the fridge,” she concluded.

We poured more into the crock pot. While we waited, the other cold dad and I enjoyed a glass of scotch. That was better than crying over the spilled milk of human kindness.

We have a bowl in our pantry where we collect candy from special events to dole out periodically to the boys. Since it is pre-Halloween, there are slim pickings left in the bowl. The last time I let Buster pick something from it, we were down to a handful of restaurant mints and few pieces of bubble gum.

The empty bowl says it’s time for some Halloween. I should pay more attention to what our dishes have to say.

Buster, who has never had gum before, picked up one of the pieces and asked, “What’s this?”

Buster envisioned this strange ritual, made and face, and concluded, “I don’t know how to do this one.” He tossed it back into the bowl and took a mint.

It will be nice to get some candy the kids understand in the bowl again.

On the other hand, Halloween is approaching at a blinding speed this year. I don’t even know what the kids are going to be yet. Big Brother mentioned something about being a soldier again, but this year wearing my WWI doughboy helmet. I nixed that idea. It’s a steel helmet, which is going to get heavy on his head in about a minute, and I’m not carrying that thing around the neighborhood. It probably wouldn’t even hold that much candy. 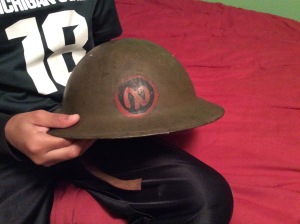 The last thing a kid’s going to want on his head for an hour, and an awkward candy carrier at best.

Some friends will be Trick-or-Treating with us. It’s more fun with friends, and the other kids will probably have good costumes. Maybe I can slide over toward the friends and kind of pretend we’re not with those kids whose parents don’t care enough to adequately costume them for Halloween.

If it’s snowing, like last Halloween, we’ll be off the hook. I’ll just tell my boys to make a show of complaining about how Mommy made them wear their winter coats and hats overtop of their super-awesome costumes. Cold weather is the great Trick-or-Treat equalizer – knocks the Pinterest parents down to my level for an evening. 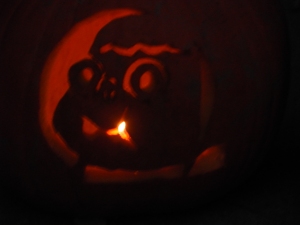 This is potentially the first year for Big Man to go Trick-or-Treating. The thing about toddlers is they don’t walk fast enough to maximize the treats potential of the neighborhood, and we’re all about efficiency when it comes to collecting free candy. I learned my lesson about trying to carry a toddler around town several years ago when I wasn’t even as old as I am now, and when the toddler wasn’t such a substantial child as Big Man is. We’re going to have to put him on wheels, somehow. Maybe he can ride in the wagon with Buster, because, truth be told, Buster still slows down the operation, too.

Halloween shouldn’t be about a dad yelling at the big kids to slow down and the little ones to hurry up. It should be about friends and fun and treats and showing respect to your dad by giving him a fair cut of your candy for his trouble.

That’s the true spirit of the season.

When I was a kid, Halloween was one day. You had a party at school. If you were lucky, it was a year when the school staff were feeling ambitious, which meant an assembly with a costume parade. That night, you went trick or treating for an hour. If you had a complicated costume, you didn’t take it off between school and trick or treating.

Nowadays, Halloween lasts at least a week. Every little business district and mall has its own trick or treat night. There are special events, all over town, for kids to get dressed up and load up with loot. My boys trick or treat where I work. It’s like March Madness for little goblins.

If you’ve read my thoughts on kids’ birthday parties, you’re all ready for me to go into a cranky-old-man rant about this. Well, the trick’s on you, because I’m not. Mostly, I’m not. The cranky old man in me will not go completely silent into that good night, but I have tranquilized him for this one.

I like expanded Halloween. Those of you who are handy and creative put a lot of time and thought into making your kids’ costumes. The rest of us put money into it. It’s a shame to have all of that time, thought, and treasure spent on one or two wearings of the costume.

Any excuse necessary to slap Daddy into handcuffs.

I like seeing all the creativity that went into the costumes. If I’m only taking the boys out trick or treating on Halloween, I don’t get to see much of this, as we tend to fall in with the same group throughout the night. And if it happens to be snowing, like it was this year, all the costumes are hidden under winter coats anyway.

At the other events is where I see all the diverse ideas that would never have occurred to me, and I couldn’t make into reality anyway. I like creativity on display, and there’s no time when you get to witness it quite like during the Halloween season. 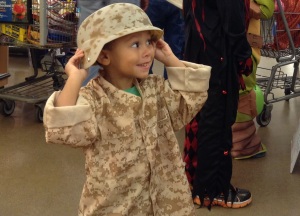 Also, I like candy, which is the foremost reason I’ve taught my children to share. The more events they go to, the more candy they get, and the bigger my cut. Sharing means caring, boys; now fork it over.

Nothing is perfect though, and if the cranky old man could pull the duct tape off, he’d tell you that I don’t care for the on-the-run dinners or the missed bed times that all this Halloween running around creates. Least of all do I enjoy the events where the boys trudge around in long lines, in the cold, and end up with a handful of those tiny Tootsie Rolls to show for it. They won’t miss the candy, but kids can tell when you’re phoning it in.

I’m content with what Halloween has become. This does not mean I’d like to see other “holidays” blow up like this. I don’t need a bloated Valentine’s Day. For one thing, the candy’s not as good.

Three out of three children have hated this costume.