Besides the 100% true stories about family life presented on this blog, I also write fiction. The books below are available in paperback and electronic formats. If you enjoy the posts on this blog, please take a look at the descriptions of these books to see if there is anything that strikes your fancy. I am happy to point out that the books are reasonably priced (especially the Kindle and Nook editions) and all their customer reviews have been very good. This is especially encouraging since none of the reviews were left by family members. (To see customer reviews, follow the Amazon links below.)

Temp: Life in the Stagnant Lane 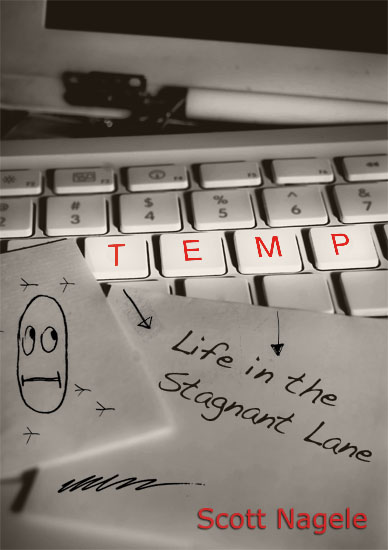 Temp: Life in the Stagnant Lane

“Local Boy Makes Good, Dies of Trying Soon After.” Fearful of this epitaph, Gary Gray seeks to avoid career pressures by working as a temp. Unfortunately, Gary repeatedly gets into trouble by being too conscientious and outperforming the permanent employees. No matter how hard Gary tries to be a meek office worker, he can’t seem to stop himself from becoming a competitive threat to his co-workers and superiors. Meanwhile, Gary’s girlfriend is smart and beautiful, and he just might be able to hold on to her if he can stay employed and quit accidentally mooning her mom.

Gary runs afoul of a host of difficult characters in the workplace. Marge Meko is thoroughly incompetent, but she has “the goods” on the boss, so she easily gets away with blaming her errors on Gary. Marge’s boss, Steve, wants all problems swept under the rug before they become an inconvenience to his cushy position. Rae is a secretary with an overblown ego, intent on consolidating power by crushing all her perceived competitors. Gary is convinced that College President Burton is a mere figurehead, pulled from the ranks of the indigent and propped up by Rae, the power behind the throne. Through his trials Gary comes to the amazing revelation that it may actually be less painful to die trying than to live the “easy” life of the temp.

A Smile Through a Tear: Stories

A Smile Through a Tear: Stories

A Smile Through a Tear is a collection of short stories featuring humorous and dramatic pieces in one volume. Five of these stories have been previously selected for publication in literary journals, including Berkeley Fiction Review.

These 17 stories are divided into humorous and dramatic sections. The humor section is inhabited by characters like Old Sam Drayton, who is convinced that he is a railroad. Wayne Grazni is the new V.P. of a growing phone company who can’t figure out how his office telephone works. Four-year-old Jeffy can’t understand why his grandma is always swearing at him. Then there’s Joel, whose job is to sit on a park bench in four-hour shifts, which should be a manageable task.

In the dramatic section, a troubled man struggles to shield his kids from the lifestyle that sent him to prison. Corporal Fitch walks a tightrope as he tries to extract his men from the grasp of an overwhelming enemy force. Mr. Humbolm is a humble merchant whose happiest Christmas experience comes at a steep price. These characters, and many more, bring you A Smile Through a Tear.

A Housefly in Autumn

A Housefly in Autumn

A Housefly in Autumn is intended for Young Adults and up. A historical novel, set in 19th century Europe, it follows the life of a young man whose dreams have crumbled down around him. In an act of heroism, he sacrifices his own promising future to save the life of another. Now he must decide whether to cling to the unlikely hope of regaining his old life, or aim his efforts toward making the most of the life fate has dealt him. Though it is difficult to let go of the rewards that life once promised, perhaps the greatest rewards are the ones earned by building new hope from the bits and pieces of wrecked dreams.

At 17, Anders Christiansen was a young man overflowing with potential. All his teachers believed he was destined to blossom into a leading man of letters, enjoying a life of rich rewards.

That was before the accident.

Now, Anders’s great talent lies fallow. He can’t produce the complex ideas he once did. His thoughts are slow and his words simple. The world holds little promise for him anymore.

Struggling to build a meaningful life out of the wreckage of his dreams, Anders learns the value of simple treasures. Loyalty, devotion, and even sacrifice hold rewards of their own to renew hope after tragedy. Love can cause hurt, but he who gives love when he hurts the most will reap a joy outweighing the pain.

Anders gives meaning to his life in the way he spends it. He will face grave danger to spare those he loves, and though his gifts be diminished, he will share them freely with even the humblest of children. Though never sought, Anders’s reward is immense and enduring, showing the millions of reasons to go on sharing even the simplest of gifts.

2 comments on “This guy should write a book.”