It’s that season again. Spring parent-teacher conferences mean it’s time to get the official assessment of your Kindergartner’s progress since November, and more importantly, admire his artwork.

Kindergarten artwork is always instructive for gaining insight into the minds of five-year-olds. This piece tells of Buster’s limitless imagination, and rudimentary spelling. 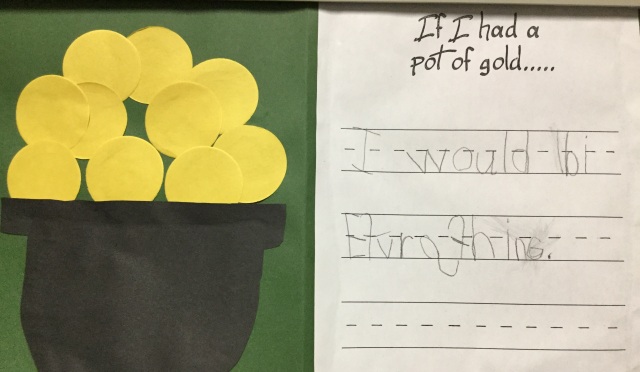 Get ready to sell all your stuff. He’s in the market for everything.

It’s the Kindergarten equivalent of “If I won the lottery,” and just like everyone who’s ever won the lottery, our kindergartner would attempt to buy everything.  Lottery winnings have never succeeded in buying everything, and I doubt a pot of gold would either, but then I don’t have any better idea of the price of everything than he does, so maybe a pot of gold would just do it. I guess it would depend upon the size of the pot.

On the other hand, I’m glad he’s got an open-ended shopping list, because I’ve got lots of stuff lying around the house I’d like to sell him, starting with a playroom full of broken toys.

Two minutes in the penalty box never looked so sweet.

This holdover from Valentine’s Day seemed odd at first. It’s the only image of a hooking penalty I’ve ever seen captured in a heart cutout. Art critics could spend weeks speculating on the deeper meaning of this piece. The kid has never played hockey or even paid attention to a hockey game on TV. He doesn’t skate and he’s never touched a hockey stick that was taller than him and not made of plastic.

Looking at it from a hockey perspective is probably the incorrect view. At a basic level this is an image of one guy jabbing another guy with a stick. That’s something every five-year-old boy can relate to. I wouldn’t be surprised if the artist imagined the jabbee to be the jabber’s older brother. Therefore, he had it coming. What kindergartner wouldn’t admire a photo snapped at that moment of triumph when he whacked his brother with a stick? The only shame is that he couldn’t find a photo of a good, solid slashing penalty.

Oh well. There’s another whole year, and half of 1st grade, to find a more romantic, major penalty picture to put inside the next heart.