He discovered the New Testament, anyway. If my Catholic youth doesn’t fail me, that’s the part of the Bible about Jesus.

Back when I was in college, a troop of elderly gentlemen would periodically spread out to the various corners of campus and hand out copies of the New Testament to passersby. One day, I came home with a dozen New Testaments in my bag; I just couldn’t say no to those kindly old men, and the echoes of my Catholic youth warned me against saying no to Jesus.

The New Testament Men don’t come around as much anymore, but I did run into one of them a little while back. As any one-time Catholic worth his salt would do, I graciously accepted the book, took it home, and immediately forgot about it.

Last week it turned up in Big Man’s hands. Big Man has taken a shine to books. Having seen the eagerness with which Daddy sneaks a minute of reading here and there, and watching the erudite Big Brother read his 20 minutes a day (most days), Big Man has become captivated by the secrets within books.

Up until now, Big Man’s favorite books have been the ones with pictures of babies, or animals, or preferably, baby animals. But there’s something about this New Testament he’s taken a particular shine to. Maybe it’s the right size, or the feel of it is just right, or maybe he’s been touched by the Holy Spirit. I’m not wise enough to say. What I can say is he carries this book around with him more religiously than he’s ever toted a teddy bear.

On Saturday, he and I ran some errands. He insisted on bringing his book. He carried it through four stores. When he held it up against his chest, he looked like the worlds shortest preacher man marching through Target.

In the fifth store, he rode in the shopping cart. He set his book down on the toddler seat beside him, leaving him hands free to reach for cookies, but as soon as we moved to the pasta aisle he checked to make sure it was still there. 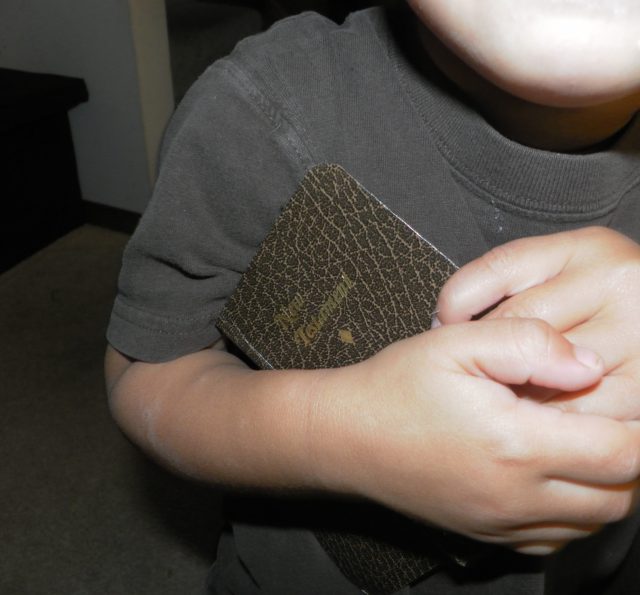 There was a moment of panic when we got back home. He asked, “Where my book?” I couldn’t remember taking it out of the cart, and God only knows when someone will hand me another New Testament. But a miracle saved us; I found it in Big Man’s car seat.

I could read something exceptionally spiritual in a two-year-old’s sudden fondness for the Bible, but this kid has a history of glomming on to unusual objects for a couple weeks before progressing to his next obsession. It’s a unique choice for a security blanket, but none of his choices are straight out of the Toddler’s Manual of Style. And if it does have a deeper meaning than I appreciate, well, I suppose there are worse people for him to be hanging with than Jesus.