On Thursday morning, Mommy went to work and Big Brother went to school. Buster didn’t have school until afternoon, so he, Big Man, and I spent the morning together. This is how we spent our time.

Usually, when Buster and Big Man decide to play with the same toy, it leads to the outbreak of hostilities within two minutes. On Thursday morning, there was some kind of magic in the air. When they played nicely together for more than three minutes, I ran for the camera to get a rare shot of tranquility: 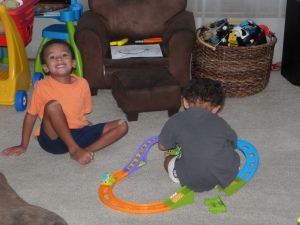 These days I can’t get out the camera without them clamoring to take it away from me and do some of their own shooting. Buster was fastest to the camera and took these pictures of Big Man:

The face behind the train.

The cut of his jib.

You can never have too many pictures of baby teeth.

Then it was Big Man’s turn. Big Man quickly learned the ON/OFF button doesn’t yield memorable photographs. Moving his finger to the correct button, which it barely reached, made a big difference:

The most interesting part of a brother is the blurry little guy on his pocket. 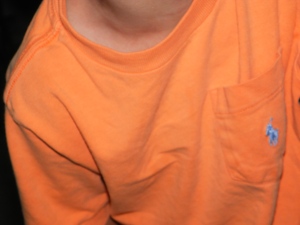 Faces are so overrated in portraits.

After the photo session, I left to boys to play (without the camera) while I put away some laundry. I’m logging that chore right here, in case my wife didn’t notice. I should have had them take pictures of me folding shirts as proof.

Then I got out the vacuum, because I can be a good boy who does helpful things around the house from time to time. Vacuuming is a nice, light, cool-down chore after the heavy exertion of putting away laundry.

Each of our children has gone through a phase of adoring fascination with the vacuum. Big Brother and Buster have both put that phase behind them. Now that he is old enough to actually vacuum effectively, Big Brother hates no appliance more. Buster is indifferent to the machine. He too will learn to hate it when he is asked to push it for five minutes and this ruins his entire day.

Only Big Man lives still in the throes of admiration for the mighty vacuum. The moment it appeared, he was all over it, unwinding its cord and plugging it in. I no longer live in the hope that this toddler-vacuum love affair will last into years of productive house cleaning. I’ve been burned before. It’s now merely a matter of letting a boy learn to hate the device at his own pace. And letting him enjoy the bloom while it’s still on the rose.

There’s gold under them there chairs. 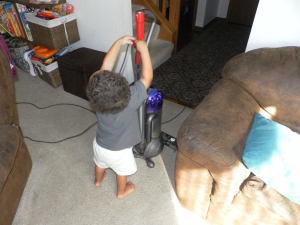 Tenderly wrapping the cord. It won’t be easy watching this love grow cold.

After vacuuming came lunch, which may or may not have undone all the cleaning already accomplished. No photographic evidence has survived. If you want an idea of what it was like, maybe you can Google images of “all Hell breaking loose.”

But, hey, I fed the kids. That’s the important thing.

23 comments on “Thursday morning in pictures”