Now that warmer weather is dipping its toes into our part of the world, the children want to be outside, which is generally a good thing but sometimes inconvenient.

At seven, Big Brother is competent to be outside by himself. Out of context, this would be a really good thing. I could tell him to go outside and play whenever I need a minute to think, or not be pestered by 1,000 questions about tornadoes, or rekindle the romance with my wife. Okay, I may need as many as two minutes.

In context, Big Brother has little brothers. The moment Big Brother even smells fresh air, Buster is at his heels, and Big Man is forming the conga line behind Buster. It’s like outside is giving away free candy and nobody wants the other kid to get it all.

When Big Brother goes outside, it begins a chain reaction, ending with me dropping whatever I’m doing and following everybody else. Outside is good, but it is certainly not giving away candy, and sometimes I have things to do in the house, like studying for my next tornado pop quiz.

I hate keeping the kids indoors, but it can’t always be helped, and we’ll have our own organic tornado if I let one go without the others. Neighborhood kids are good at asking Big Brother (and his necessary coattails) to come out and play at inconvenient times. It’s difficult explaining the dynamics of why he can’t go out by himself, so it’s nice when there’s a handy excuse for keeping him inside. Something like “He’s doing his homework right now.” or “Dinner is in three hours, so he has to get ready for that.”

Without sound, you can’t even tell this is the beginning of a fight.

On the road again. 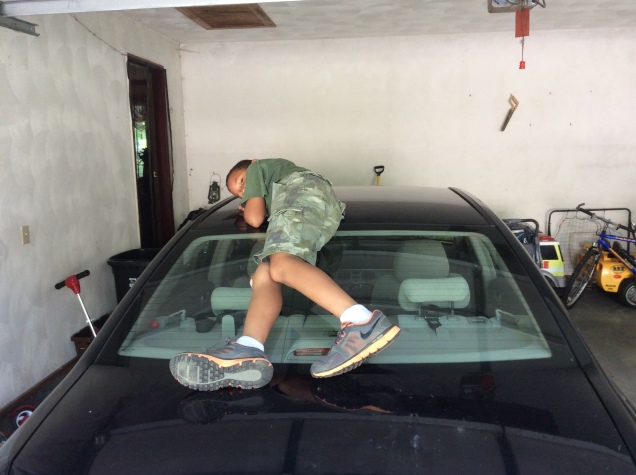 Big brother on his favorite vehicle. Dream on!

It wouldn’t be so bad if they would stick together once they got out there, but they have different interests, aside from their monolithic desire to be outside. They all have vehicles to ride and two will want to go different directions down the sidewalk while the third heads out cross-country. The good news is they will all stay in one place when they start fighting over who gets to ride what. Then, there will be tugging and yanking, and maybe some crying, which is a good way to keep track of where they are.

Outside is especially tricky at this time of year when the days are long but school is still in session. It’s mean enough to make a kid go inside, but to then make him go to bed is downright cruelty. I know this because I’ve been told so every night this month. It’s totally “not fair!” I’ll consider that while I wait to get old enough to come and go as I please.

14 comments on “Dads need to go outside and play in the fresh air too, apparently”