My son sometimes plays a game where he pretends to be a waiter. He calls us Sir and Ma’am and writes down what we would like to eat on his imaginary order pad. We have grown to like the restaurant he works in because they have an expansive menu and can prepare anything we think of ordering.

As the boy grows up, the world becomes less pretend and more real. In this development, something is gained and something is lost. For instance, last night our four-year-old waiter actually served real food. This was a revolutionary step forward, but it played havoc upon his once expansive menu.

“Okay, what would you like?” he replied as he got out his invisible order pad. We expected him to take the order, disappear, and reappear with an equally invisible dish of whatever was ordered. 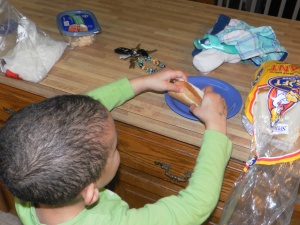 THE COOK: The key is folding the bread right. A delicious sandwich must look as good as it tastes.

“No pizza?” the dejected mother asked.

“I guess I’ll have a cheese sandwich. But I only want one slice of bread.”

He went to the kitchen. We heard noises of actual food preparation from that direction. “Do you want a kid plate or a grown-up plate?” he yelled to her. 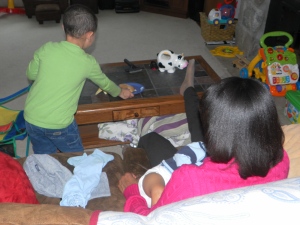 THE WAITER: Our menu has expanded to include cheese sandwiches served on solid blue kid plates.

He rooted around the kitchen for a few minutes before returning with a beautiful cheese sandwich on a solid red kid plate. The presentation was as good as either of his parents could have done. There was one piece of bread, folded evenly over a few neatly stacked slices of American cheese. There was nothing sloppy about the sandwich.

“Wow! That’s a nice-looking sandwich,” his mother told him. “Look at all that beautiful cheese.”

“You got an extra slice because you’ve been so good today,” he informed her.

The sandwich looked so good that everyone, including the baby, had to have a bite of it. I’m not a huge fan of cheese sandwiches, but that was just about the best bite of anything I’ve ever had.

As we all took a taste, the waiter/cook/restaurant manager explained the shortness of the menu. “I can only make things that don’t go in the oven or on top of the stove, because I could burn myself.” He gave us a serious look. “I mean, I could burn myself really bad.”

So, they no longer have a huge selection of entrees at this restaurant. I don’t care about that. What they do have, they make with great skill and, I dare say, with love. Besides that, the service is excellent.

8 comments on “Welcome to the real world; here’s your cheese sandwich”