For reasons unassociated with my personal viewing preferences, we have been watching movies on the Syfy channel of late. This is the outlet where up-and-coming actors and screen writers practice as they wait for a big break that will earn them recurring roles on Lifetime, thus winning them fame and respect for their craft.

The two big blockbusters we watched recently were Sharknado and Snowmageddon. Sharknado was a tornado made up, or at least consisting largely, of sharks. Rather than sucking things up, as might be expected of your garden variety tornado, Sharknado spit things out, namely sharks. It is possible that it may have originally sucked them up from the ocean, or SeaWorld, but I missed the beginning and I don’t want to make assumptions, as I am not a trained Meteorsharkologist.

In spite of the shocking nature of the material, the acting was outstanding. The sharks nailed all of their lines. I think many of them did their own stunts. If not, the stunt doubles were made up perfectly; I couldn’t tell the difference between the stunt sharks and the lead actors.

Snowmageddon was about a winter storm that, beyond hurling wind and snow at innocent folks, also shot at them. I’m not talking about real bullets; that would be ridiculous. This snow storm shot flaming chunks of ice that exploded into fireballs on contact, just as you would expect to see any bad winter storm do.

I knew I should have bought a snow blower this year.

At first, I thought this was Mother Nature’s revenge for our cavalier use of fossil fuels, but then Snowmageddon appeared to take special pleasure from attacking a bus. Well, Mama N., if you insist on destroying our means of mass transit, I guess there’s nothing we can do to please you. We might better learn to take our flaming ice beatings like men, or add extra horse power to our vehicles so we can run away faster.

Incidentally, all of this wacky weather was caused by an enchanted snow globe. Maybe it’s time to stop worrying about carbon footprints and start questioning our need for dangerous souvenir collections.

Shortly before we switched the TV over to the Smurfs movie, my son asked me about Snowmageddon, “Daddy, is this fiction?”

“Because it’s not real?”

“Was the shark tornado movie fiction?”

“Then what about aliens? Are they non-fiction?”

This wasn’t so easy. Though I’ve had conversations with space aliens online, I’ve never met one face to face. Still, the universe is a big place.

Before I could begin to formulate an appropriately wishy-washy reply, he answered for me. He pointed his finger directly at me and exclaimed, “Yes! Aliens are real!”

“Because there was a show about them on the History Channel.”

I’m not sure which channels to get my news from anymore.

Driving home at night. It’s not completely dark because the five-year-old is playing with a flashlight. Every 30 seconds, I see police lights in the rear-view mirror. I wonder what I did wrong, until I realize it’s just that damned flashlight. But he really wants to see it, and promises he won’t shine it upwards anymore.

It’s loud in the car. The one-year-old is crying his most desperate cry – the one he reserves only for emergencies like wanting breakfast, not wanting his diaper changed, wanting the toy his brother has, or not wanting to ride in the car right now. It was a struggle getting him into the car seat. He stiffened himself, ramrod straight, because they can’t fit you into your car seat if you don’t bend in the middle. He has strong abs for a pipsqueak. Mommy is sitting in back, trying to console him. He won’t be consoled.

It’s raining. Not a steady, windshield-cleansing rain. It’s that fine drizzle that clings to the greasy film of life outside the glass. Those name-brand wipers that cost double, but were worth the price of protecting the family, excel at smearing nature’s spittle and assorted bug innards across my view. Despite his promises, Flashlight Boy finds the perfect angle to play a beam of light off the rear view mirror. Retinas spin cartwheels.

This blind and deaf moment was an entire day in the making. It’s the cost of hitting every free event in town in a single day.

It started at the Home Depot kids workshop, building a kit plane. They give the kids aprons and access to lots of paint. The person next to a kid with a paint brush needs the apron more, but parents are left to fend off wayward strokes on their own. 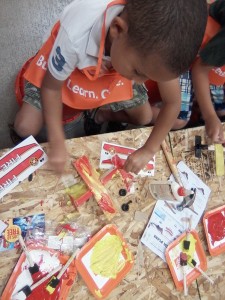 A five-year-old and paint – a dangerous combination.

A one-year-old and paint – sheer madness!

There’s no time to let the paint dry before the firefighters’ exhibition. Nobody with a big, red truck that shoots water needs a bounce house to attract children, but firemen often add this overkill anyway. They set a simulated room on fire. The one-year-old wants to help them put it out. He wants this more than popcorn or chips or fruit punch, which means he wants it a lot. He kicks and screams when Daddy holds him back from his heroic intentions.

Getting ready to put out the fire, all by themselves.

Then, it’s off to the inter-squad game of the university hockey team. Inter-squad exhibitions always run too long, even without hungry kids. Even the Zamboni loses its mystique after the second period.

Dinner isn’t free, but it’s pretty cheap in the university cafeterias. At one of the remodeled halls, it’s also one of the better meals in town. It’s like Disney World, for pennies on the dollar. Food revives the kids just enough to keep them from sleeping peacefully on the ride home.

And that’s the problem. I drive by memory until my pupils stabilize. Mommy confiscates the flashlight and we make it home safe. Four people trudge into the house, all of them cranky. It must have been a fun day.