You should know what you’re getting when you sit down to watch a behemoth, radioactive lizard frolic around the Pacific rim. I had a hunch; I should have listened to it.

My wife and I hadn’t been out on a date in months. She wanted to see the new Godzilla movie, mostly because of Bryan Cranston. He wouldn’t jump from Breaking Bad into a ridiculously stupid movie, right? Right?

We dropped the big boys at the neighbor’s, but we kept the baby because my wife has a strange fetish with movie theaters. She’s not happy unless she can sneak in McDonald’s food or brazenly walk in with a tiny human who could go off at any moment. I drew the line at McDonald’s being part of our date.

The baby was incredibly quiet through the movie, except for a brief period when his foot got stuck under the arm rest. He did not infringe on anyone’s enjoyment of the film. I wish I could say the same thing for the film. 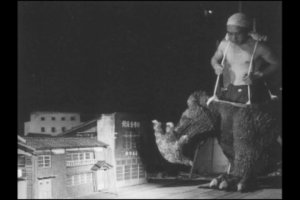 Just roll in some toy army vehicles and we’ve got ourselves a movie.

I would issue a spoiler alert for what comes next, but the real spoiler will be seeing the movie theater charge show up on the credit card statement.

My wife felt cheated that Mr. Cranston was in less than half of the movie. She figured they must have run out of money to pay his huge salary at that point. My theory is that he saw the rest of the script and bailed. I have yet to figure out what his character added to the plot anyway, other than a crazy old man who turned out to be right, but so what? Crazy people are always right in movies. 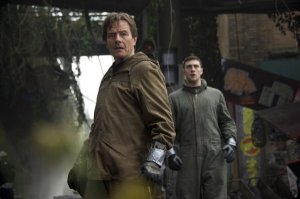 My wife is much more charitable toward films than I am, but when the lights came up, her first words were, “Want to know all the problems I have with that movie?”

I don’t even remember all the problems. I do recall that after an EMP wave fried all the electronics in San Francisco, preventing the heroes from driving into the city, they were able to hotwire a boat at the dock with no problem. Yup, it fired right up, with spotlights on and everything.

Oh, and then there was the ultra-powerful atomic weapon that was detonated about 10 feet beyond the Golden Gate Bridge with no consequences to the city. Too bad they dragged all those puny Cold War atom bombs all the way out to remote islands. They could have used those for a fireworks show at Candlestick Park.

This would have been the worst Bryan Cranston movie ever, had he actually been in it. But that’s okay; we’ll probably have another date night next year.

For reasons unassociated with my personal viewing preferences, we have been watching movies on the Syfy channel of late. This is the outlet where up-and-coming actors and screen writers practice as they wait for a big break that will earn them recurring roles on Lifetime, thus winning them fame and respect for their craft.

The two big blockbusters we watched recently were Sharknado and Snowmageddon. Sharknado was a tornado made up, or at least consisting largely, of sharks. Rather than sucking things up, as might be expected of your garden variety tornado, Sharknado spit things out, namely sharks. It is possible that it may have originally sucked them up from the ocean, or SeaWorld, but I missed the beginning and I don’t want to make assumptions, as I am not a trained Meteorsharkologist.

In spite of the shocking nature of the material, the acting was outstanding. The sharks nailed all of their lines. I think many of them did their own stunts. If not, the stunt doubles were made up perfectly; I couldn’t tell the difference between the stunt sharks and the lead actors.

Snowmageddon was about a winter storm that, beyond hurling wind and snow at innocent folks, also shot at them. I’m not talking about real bullets; that would be ridiculous. This snow storm shot flaming chunks of ice that exploded into fireballs on contact, just as you would expect to see any bad winter storm do.

I knew I should have bought a snow blower this year.

At first, I thought this was Mother Nature’s revenge for our cavalier use of fossil fuels, but then Snowmageddon appeared to take special pleasure from attacking a bus. Well, Mama N., if you insist on destroying our means of mass transit, I guess there’s nothing we can do to please you. We might better learn to take our flaming ice beatings like men, or add extra horse power to our vehicles so we can run away faster.

Incidentally, all of this wacky weather was caused by an enchanted snow globe. Maybe it’s time to stop worrying about carbon footprints and start questioning our need for dangerous souvenir collections.

Shortly before we switched the TV over to the Smurfs movie, my son asked me about Snowmageddon, “Daddy, is this fiction?”

“Because it’s not real?”

“Was the shark tornado movie fiction?”

“Then what about aliens? Are they non-fiction?”

This wasn’t so easy. Though I’ve had conversations with space aliens online, I’ve never met one face to face. Still, the universe is a big place.

Before I could begin to formulate an appropriately wishy-washy reply, he answered for me. He pointed his finger directly at me and exclaimed, “Yes! Aliens are real!”

“Because there was a show about them on the History Channel.”

I’m not sure which channels to get my news from anymore.