Buster and Big Man got into a debate, separate and apart from the many outright fights they have over LEGOs, somebody calling somebody else Butt Cheek, or the billion other potential provocations. This debate involved no hitting or kicking, probably because I intervened before it had a chance to run its normal course.

The debate revolved around the fingers of the hand as they related to our family structure. We happen to be a family of five, which means each person gets to be represented by a digit on the standard human hand.

They agreed that Daddy was the middle finger, because of its relative length, not because of its proclivity to become rude when left unattended. Mommy was the ring finger, because in our family, ring fingers run slightly taller than index fingers, just like Mommy is still slightly taller than Big Brother. Conversely, Big Brother was the index finger.

The thumb is set apart and stands on a lower pedestal than the rest. This is what they saw when they looked at their hands. It was different and apart. Nobody wanted to be either of those things. 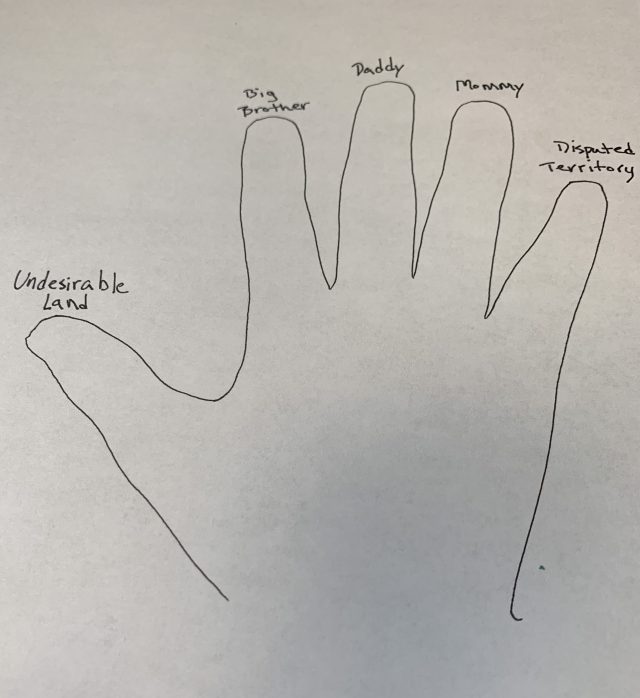 They went on casting each other in the role of thumb, without a thought to its uniqueness or value.

Because the debate was becoming annoyingly monotonous, somebody had to step in and tell them who was right and who was wrong.

“You’re both wrong,” I told them. They looked at me with incredulous faces. How could they both be wrong? There were only two positions in question, and between them, they had all the possibilities covered.

They stared at me dumbstruck. How could Mommy be the lowly thumb, the digit nobody wanted to be?

How little they understood the miracle of the thumb, the digit that brings all the fingers up to their potential.

“It’s true,” I told them. “Mommy is the opposable thumb of this family. She’s the one who makes it all work. She is what separates us from the animals. Without her, we might as well be a family of skunks.”

Well, Mommy does her best to differentiate us from a family of skunks, but she has her work cut out for her in this house full of stinky boys. Sometimes I think she should move away to someplace nice and let us revert to our natural state, but a good thumb never abandons the hand.

20 comments on “The opposable thumb of our family”