I know it’s going to be a difficult morning when I go to wake Buster. Buster is the closest kid we have to a morning person. After one week of school, I’ve formed the habit of getting him up first. I start off easy and work my way up to the hard cases.

It’s Tuesday morning, after the long Labor Day weekend. Last week went all right, but now they’ve had a four-day weekend to consider things and realize they dislike school just as much as they ever did. The new year hasn’t changed the fact that “The Man” is still holding them down with classroom rules and homework.

They’ve gone for the gusto over these four days off, trying to relive the entire summer in a long weekend. It’s time to pay the piper.

Buster (2nd grade) doesn’t sit up when I put my hand on his covers. I try to rub him awake. “I can’t,” he groans. “I’m too tired.” I pull the covers off him. He pulls them back on.

I move three feet below to the lower bunk. I don’t have high hopes for waking Big Man. Big Man (Kindergarten) is sleeping upside down. This isn’t a good sign he’s well-rested and ready to face a new day. He does not respond to any of my gentle attempts to rouse him. The lower bunk is like a bear cave. I contort myself to squeeze under the upper bunk without banging my head (which I’ve already done twice in 3.5 days of school). I grab the cub’s toe and drag him out of his hole.

Leaving Big Man in the bathroom to brush his teeth, at least the front ones, I return to Buster. All the tumult in the bunk below has made it impossible for him to get any rest. His spirit is broken and he allows me to carry him to the bathroom.

It’s now time to tackle the biggest Billy goat. At least Big Brother (6th grade) doesn’t have a bunk bed, so I won’t bruise myself waking him. He is larger though, so I have to pull by booth feet to drag him from the bed.

Downstairs, I offer the little boys breakfast. Buster answers all my overtures with grunts. Big Man says he isn’t hungry, but I don’t want to send them off with empty bellies. Big Man finally condescends to accept some bread and butter. I’ve got to get these kids off and get myself to work, so I don’t have time to negotiate him into a heartier meal.

I give Buster and pad and pen. I tell him to write what he wants to eat. He doesn’t know how to sound out grunts, so he writes Nothing. It’s spelled right.

I hate to send him to school like this, but he might learn a lesson from a hungry morning. Plus, he spelled Nothing right. It’s too early in the morning not to accept the victories these kids hand me. 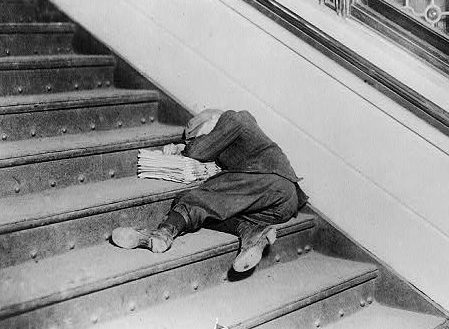 This one’s all ready to go. Good work, Dad!