It wouldn’t seem right to skip my annual report on putting up the Christmas tree. We were a little later than usual putting ours up this year. The boys forgot to nag about it for a little while which allowed the parental holiday sloth to take over.

Eventually the boys realized there was some hulking monstrosity missing from our already crowded living room. The sloth was chased from the house, but the parent host was made to stay and drag all his tubs of festive cheer up from the basement.

We have an artificial tree (the sloth’s legacy), which the boys were eager to assemble. You don’t get that kind of quasi-LEGO experience with a real tree, no sir. On the other hand, a real tree doesn’t require the dreaded chores of spreading wire branches and fluffing Mylar needles. It’s a Yuletide tradeoff.

After the first minute of branch-fluffing, I noticed Big Brother and Buster had disappeared. Big Man was still invested though. He helped me test the lights, and gave me tons of helpful advice about where I should run each strand. I was switching the TV back and forth between a basketball game and a football game, and trying to finish cooking a stew in the other room, so he certainly put more thought into running the lights than I did. One way or another, they got on the tree.

The football game was coming down to the wire, so I corralled Big Brother and Buster and made them help Big Man hang ornaments while I let myself become distracted. There was an indirect correlation between the height of the decorator and his enthusiasm for the job, which is why the bottom of the tree is more densely populated than the top.

We have a number of TV character ornaments. Big Man found two from the same cartoon. “I have to hang these two next to each other, because they’re friends,” he told me. I couldn’t argue with that. Besides, I gave up arguing with children about the proper ornament disbursement years ago. Joyful little hands always make a more beautiful tree than cold geometry does. Sure enough, Finn and Jake ended up dangling from the same branch. Friends should always hang together. 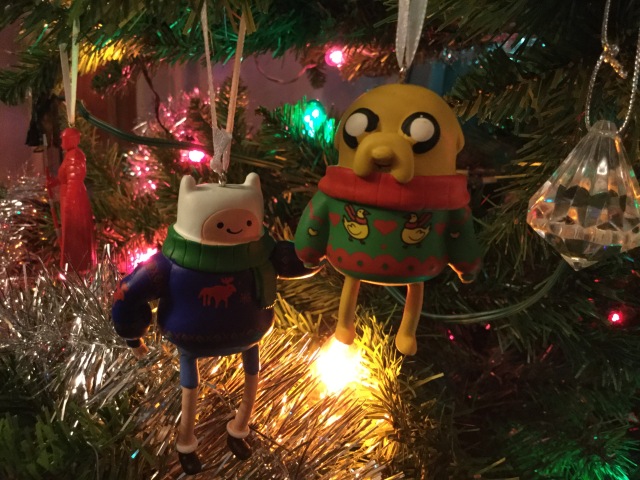 Finn and Jake always hang together. It’s what friends do.

Later I noticed Rudolph, Clarice, Yukon Cornelius, Hermey, and the Abominable Snowman hung in a group. So were Homer, Bart, Marge and Lisa. Both television casts were on display near the bottom of the tree, leaving no doubt as to who hung family and friends together.

Why are Rudolph and Hermey in such a hurry? 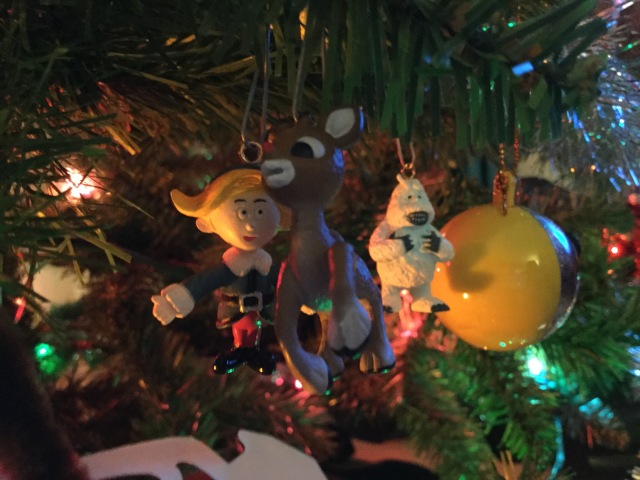 Abominable Snowman is after them!

Big Man may not win any Martha Stewart Christmas Tree decorating awards, but he’s ahead of the game on empathy. I’ll take that over a perfectly balanced tree any day. It’s a good thing.

26 comments on “We must all hang together”