I wish three-year-olds devoted as much effort to learning their letters and numbers as they do to perfecting potty talk. If working poop into every conversation were a preschool subject, Buster would be at the top of his class. He’s not as much into the alphabet or counting, although he can count to 19, by 19s, but the numbers in between 0 and 19 are white noise.

Going potty at the appropriate time and place is a big deal in a preschooler’s world. As such, poop is an important word to know and use in the development of good hygiene routines. That’s where it ends for the grown-ups, but for the three-year-old, the word poop is an expressive cornucopia.

And in those rare circumstance when poop doesn’t quite fill the bill, butt usually works as a good substitute to bring the point home.

For instance, Buster might offer his impression of Mommy or Daddy giving an ultimatum this way: “If you don’t pick up these toys right now, Big Brother will poop in his pants!”

Where the threat fails is in the fact that Big Brother has not been consulted, and the method of enforcing  the threat is news to him. Big Brother will balk at his role in the proceedings, which may lead Buster to call him a butthead. This is tough on Big Brother as he is sensitive about what part of his body he carries atop his neck. Buster seems to have thicker skin than Big Brother. He is also more ruthless with the trash talk, which leaves him in better shape to endure the times when sibling rivalry goes verbal-nuclear.

Butts are not just a conversation piece. Sometimes they are real and can be a menace to society. One day, I came home to find Buster dressed in his Batman outfit, looking for bad guys to vanquish. He ran over to me and announced, “Your butt is the Joker.” Without giving my butt a chance to profess it’s innocence, he punched it in right in the proverbial nose. I was just happy I was facing the counter at the time because some villains can take a punch and some villains can’t. 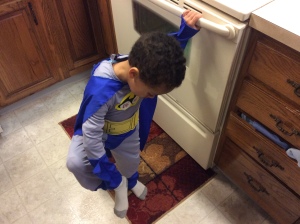 Uh-oh! Looks like Batman stepped in something when he started accusing innocent butts of being arch-villains.

I can stand a butt punch from a crime fighting three-year-old as well as the next guy, but that doesn’t mean I should have to. I sat Buster down to have a long talk with him. Within minutes, our heart-to-heart devolved into a discussion about . . .