Sometimes I feel sorry for my wife. She has to parent three boys without the benefit of having ever been a boy herself. Nor did she ever get any practice suffering the slings and arrows of mean brothers.

I, on the other hand, was a boy for a very long time before growing into a husband. Altogether, I can demonstrate a long history of childishness. Also beneficial to my standing as a parent of boys is my wealth of experiences with mean brothers. I had mean brothers coming down from the hills to insure that all the days of my youth were peppered with toil and trouble. They became tolerable adults, but as a youngster, it was hard to have any kind of parade not rained upon by the mob. I may even have sprinkled on somebody’s festivities myself, but this was only in self-defense, or at worst, retaliation.

My wife has little patience for the boys’ foolish fights. Though I find their fights annoying, I am less inclined to intercede. Foolishness and fighting are two of the load-bearing beams underneath boyhood. The third pillar is grime, but we’ll leave that one alone for now. The point is, brothers are going to fight, and yelling at them about it seems to only make them fight louder.

When our boys fight, I try to replace the instinctive scolding with a few philosophical words of advice, once the battle has run its course. 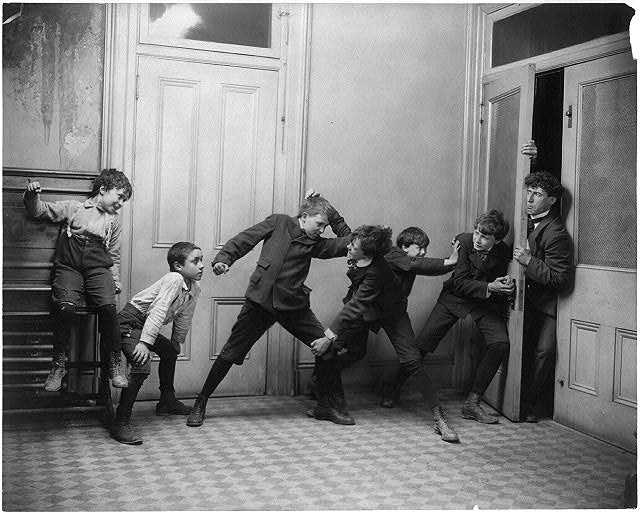 Last Saturday, I was upstairs when the quiet of the house was interrupted by crying from downstairs. It wasn’t the usual child’s cry; it was the sweet harmony of two children crying together, each attempting to reach higher octaves and greater decibels than the other. It was the telltale sound of a war that had ended badly for both sides.

When my leisurely pace brought me downstairs, I found two children sitting on the floor opposite each other. The larger one was holding his lip. The smaller rubbed his arm. When they saw me, Big Brother interrupted his bawling to tell me Buster had socked him in the mouth. Buster didn’t waste any words. He looked at his victimized arm and pointed at Big Brother. Between them lay the random toy that had caused the strife.

Both wanted me to punish the other for his unjust aggression. I reached down between them, opened my hand, and picked up the toy. As I walked away with the trophy, I shook my head. “Doesn’t look like violence was the answer today, does it?” I said as I carried the spoils of war into the next room.

The crying ended as soon as I left. Both lip and arm healed up fast. They returned to play, and peace reigned for upwards of five minutes.

The era of good feelings was nice and I enjoyed it. Afterwards, they fought again. I yelled at them that time, because, in spite of my own boyhood and brothers, I only have so many words of wisdom to go around.

22 comments on “Violence was not the answer today; we’ll try it again tomorrow”