One of the joys of parenting growing boys is watching them mature to into playing cooperatively together. Seeing them sit and help each other tear apart a LEGO set I spent hours helping them build, so they can mix the pieces irretrievably among the remains of other disassembled LEGO sets I invested hours in, is pure gold.

Seeing any two of them sit shoulder to shoulder in the chair, quietly intent upon the cartoon on TV is a gratifying experience. Even when Big Brother helps Buster through one of the difficult parts of a video game, though I’m kind of supposed to feel bad for letting them play so many video games, I get a feeling of pride for my boys’ desire to be friends with each other. 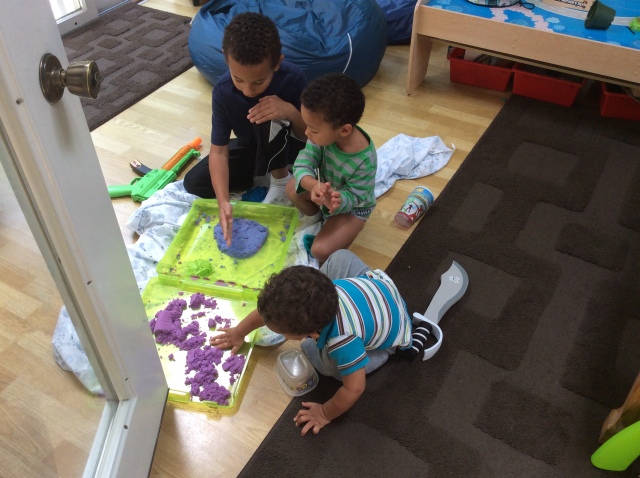 The boys are playing nicely together. Grab the camera!

Of course, nothing gold can stay.

The giggly roughhousing turns sour when somebody catches an elbow. There’s one, insignificant LEGO piece that every boy needs to have in his hand right now, though it’s only value to him is that his brother wants it. Big Brother helps Buster with his game to such lengths that his assistance has turned into a tug-o-war over the tablet.

Peace between young brothers is so gratifying because it is so fleeting.

It’s always fun until somebody loses a temper.

The two most common phrases in my house are currently, “I’m telling!” and “[Brother’s name] is mean!”

Even Big Man, who can’t pronounce any of the words, lets me know when one of his brothers is mean, and leaves no doubt about who is the culprit.

I most often overhear “I’m telling!” from the next room, but I have to look accusations of meanness right in the eye. It’s not always easy to do with a straight face.

It gets a little tiresome having to hear about mean people several times a day, every day. I’d like to hear about nice people every once in a while, but who notices, much less mentions, when his brother is nice?

Last time Buster came to me to file a meanness complaint against his big brother, I let out my exasperation with their perpetual denouncements. “I know, I know,” I told him. “Everybody’s mean.”

He shook his head. “Everybody not mean.” He held up a solitary finger. “Only one mean.”

He turned his little, bony finger across the room toward Big Brother. “That one,” he said in his best voice of condemnation. “That one mean.”

At least he didn’t call him stupid, that time. Three-year-olds love the word stupid. It’s their first insult, and insults and brothers go together like farts and giggles. Stupid is not a nice word, though, so we’re trying to get him to call his brother intellectually challenged instead. It will buy some time while he learns to pronounce it.

Meanwhile, we’ll continue acting like we’re listening to all the pleas and accusations that come running to us. In between, we’ll enjoy those fleeting flecks of gold that sparkle when brothers are best friends.

23 comments on “Is the sibling who was mean to you in this courtroom today?”