The boys were a  dream over the weekend. Unusually well-behaved and full of imagination, they provided several snippets worth remembering.

It began Thursday night, at the book release party my wife threw for A Housefly in Autumn. There were other events at the venue, with lots of people in fancy clothes attending them. As he helped push our wagonload of books into the elevator, Big Brother looked up and asked. “Daddy, do all these people know you’re famous?”

I changed the subject. I didn’t have the heart to tell him the truth. I should have said, “Someday, they’ll know,” but I didn’t think fast enough. Anyway, it makes me proud and humble enough to know I’m famous to him.

On Saturday, Mommy went away on an overnight visit, bravely leaving her house in the hands of us four men. We didn’t break the house, as far as Mommy knows, and we had lots of fun. Big Brother invented two new jokes.

Q. What does corn call its father?

Q. What does an apple call his grandmother?

You can see the pattern he was working on for his comedy that day.

When Mommy’s away, two boys and a blanket lump will play. 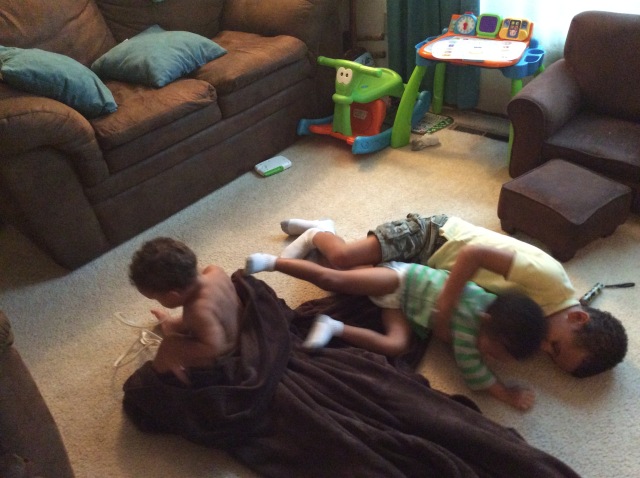 Did that blanket just give birth to a Big Man?

You boys go about your play. Big Man’s on the march. 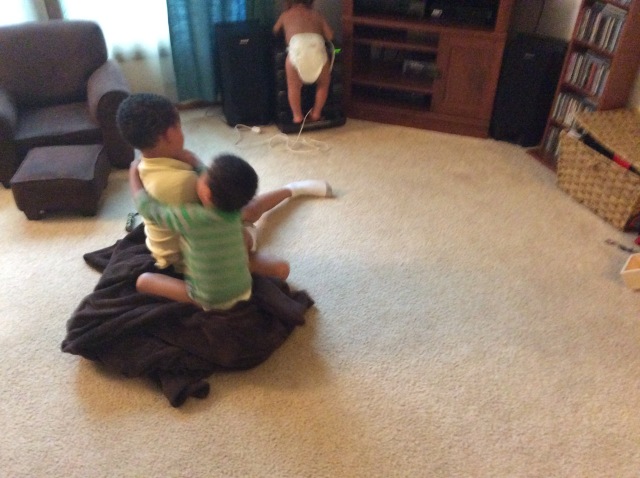 Why is he climbing up the stereo? 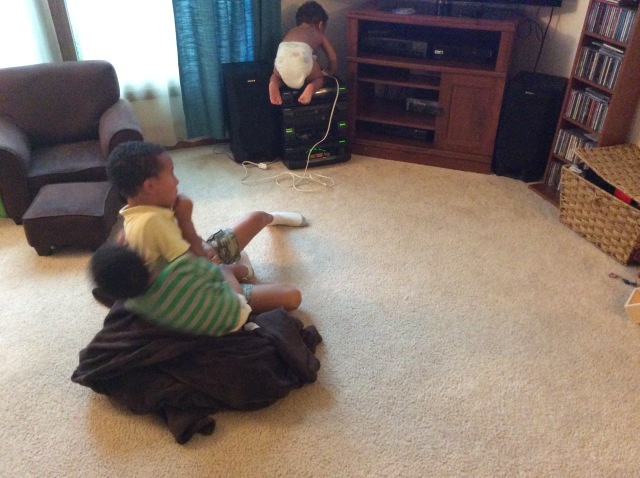 Of course! An extension cord will make the perfect addition to the stash of useful objects he keeps in his hole behind the stereo.

On Sunday, Big Brother said he was worried. “Mommy hasn’t called or texted or anything!”

I reassured him that she had texted me. He looked disgusted. “Why didn’t you tell me?” Now that I know he’s a worrier, I’ll be sure to keep him in the loop. He’s right to worry about Mommy’s safety, considering that I’m the only parent he has in reserve.

We were low on food, so I got to do one of my favorite things in the world: go grocery shopping with three boys. Before we left, Buster insisted I help him tear off a piece of Scotch tape. He attempted to wrap the tape around a “Boo-boo” on his baby brother’s finger.

He nodded to reassure me. “It is. It is Band-Aid,” he insisted.

I finally convinced him to leave Big Man alone. He contented himself with wrapping the tape around his own finger. In the car, he tried to convince Big Brother his finger was bleeding.

“It’s not bleeding,” Big Brother insisted, because he’s a pathological corrector, even of  three-year-olds with big imaginations.

“It is bleeding!” Buster shouted back. “Doctor say it bleeding.”

For the rest of the ride, Big Brother attempted to pin Buster down as to exactly when he had been to the doctor.

Buster gave up the argument, secure in his own knowledge that he possessed both a bleeding finger and a Band-Aid. Sometimes, you just have to ignore the skeptics.

Big Man slept through most of the supermarket, and the other boys were surprisingly good. We hit almost every aisle and I didn’t have to break into a run once.

We went home and had sloppy joes, corn on the cob, and watermelon. Then Mommy came home and they ran to her as if she were all that could save them from the collapse of society.

I’m still not as famous as Mommy, but all the blood was imaginary, so I guess we did all right.

23 comments on “Doctor say it bleeding”