Our six-year-old has been bugging us to put up the Christmas tree since Thanksgiving. There’s nothing wrong with this and I’m not complaining. I’m just stating a fact: he’s been bugging us about it. He’s six. That’s his job.

We’ve never put up our tree before December, though we have sometimes put it up early in December. But those were not years when we owned both a toddler and a baby. This year, the parents delayed as long as possible.

Buster won’t be too bad with the tree. He’ll break a few glass bulbs and yank some garland just to get into the spirit of the season. Then he’ll focus his destructive energy on other household objects as the tree becomes commonplace. Any real damage will be accidental, as he runs sideways into the tree while juking to avoid the football tackle of his big brother.

New Baby is a different story. He will eat the tree, one ornament at a time. It will become his seasonal commitment to consume any part of this giant Christmas cookie that can be reached from the crawling position. If he cannot reach a particularly juicy-looking berry, he will tug at branches with his Kung-Fu-Grip baby hands. He is a big, hungry baby, and his hunger feeds his ambition.

These are Mommy’s reason for delay. Daddy shares them, and adds a reason of his own. Daddy’s reason is that he will be left to assemble the tree with only the quality of help that a six-year-old and a two-year-old, working in unholy alliance, can provide. 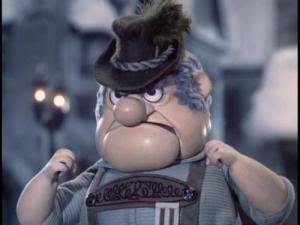 “Anyone who puts up a Christmas tree will be severely scolded in a cartoonish German accent!”

Mommy is the superhero of holiday cheer. She tracks down the most obscure gifts; she braves freezing cold for Christmas parades; she travels far to show her boys Santa, or even one of his less-renowned, black-nosed reindeer. But there is one thing Mommy doesn’t do. Mommy doesn’t put up Christmas trees.

Apparently, in the village where Mommy was a child, the Burgermeister Meisterburger decreed the decorating of Christmas trees a crime worthy of horrible punishments, because, to this day, Mommy flees to her quiet place at the prospect of tree trimming.

This leaves Daddy with his short stack of helpers. The moment they begin attempting to untangle strands of lights and free individual wire hooks from the grand hive of wire hooks, Daddy remembers who tangled the lights and packed the hooks into a wire nest at the end of last Christmas. This may remind him that, when it comes to tangling and untangling, little hands know only one direction.

This great revelation is useless. It will neither help him now, nor comfort him later, when a child asks, “Why won’t any of the lights in the middle of the tree light up?”

“Because that’s the tradition in this house, son. Are you almost done tying knots into the garland?”

We finally got the tree up and the lights on it, but then we had to take a break from all of the helping that was going on. It’s hard for anyone to get into the Christmas spirit once Daddy starts yelling.

We’ll take a breather, then give it another go. We should have it all up just in time to start taking it down.

Our progress to date. Maybe we’ll have more time to work on it after Christmas.