It occurred to me recently that children are like drinks of scotch. After you’ve had a couple, someone will attempt to take advantage of your impaired condition to convince you that just one more would put you right smack dab in the zone of happiness. It doesn’t matter how many times you’ve suffered headaches caused by your liquor or your kids. It’s not like you’re going to have half a dozen more, just one, and a little one at that.

Since I’ve had children, I don’t spend much time with scotch anymore. Only time will tell if I made the right choice.

I hope it’s the right choice because we’ve made it again. We’re going on this exciting and frightening adventure one more time. 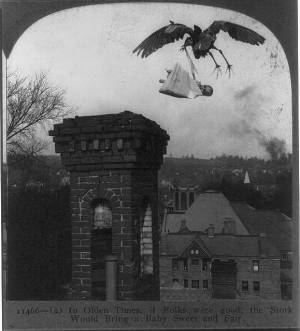 I sure hope they’ve updated the safety regulations on stork transportation.

It’s exciting because my children make me happy, albeit with undertones of aggravation. A third would, by my calculations, increase that happiness by 50%. That doesn’t even account for compounding, but I want to keep any math I have to do as simple as possible.

It’s exciting because I’m still thrilled that a woman of my wife’s caliber would agree to mix her excellent DNA with my swill just once, let alone three times. My wife is amazing; her only failing is an occasional lapse in judgment.

You’d think that by the third go-round, the fear factor would be mitigated. It’s not. It’s a different fear. It’s not that old fear of being sent home from the hospital with a living creature and inadequate training on how to keep it that way. It’s the fear of stretching resources beyond their limits. The house suddenly seems too small. My car is definitely too small. College just became an even fiercer financial dragon. I don’t even know how these kids are going to pay off their preschool loan debt yet.

Retirement? Never heard of it.

After the sixth child, Teddy Roosevelt kept a shot gun filled with bird shot next to his bed. (Image: Kermit Roosevelt)

Since we can’t trade in our house, we’re looking at minivans. I hate to give up the 15-year-old car, fully equipped with power nothing, that used to be the symbol of my Spartan existence, but I can’t find any infant seat anchors on the hood. And minivans aren’t so bad. I’m actually looking forward to taking 20 minutes to place an order at the drive through (30 minutes, if the kids want something to eat).

I recently learned from one of my favorite Mommy Bloggers that I’m some kind of hipster because I got married in my late 30s and am producing offspring well into my 40s. First off, she’s confusing trendiness with the inability to get a date for 20 years. Secondly, I just got a whole lot more hip, sister! And it’s not because of the replacement surgery. Not this time.

So the cat’s out of the bag. A bun is the oven. Where’s the scotch?

P.S. I want to send thanks to couple of fantastic blogs. Randomnessessities nominated me for the Liebster Award and Are You Finished Yet? nominated me for something I don’t quite understand but I’m sure is a high honor. Both are very well written blogs. You should check them out.

21 comments on “Bar tender, my darling, let’s have another round over here!”