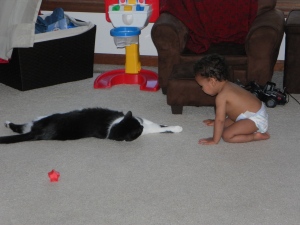 “The thing I love best about you is that you’re so unpredictable.”

Our baby and our cat are best friends. This is an unexpected development. When the big boy was a baby, he and the cat had an awkward relationship. The thing they had most in common was a wariness of the other. They might have been reality TV show contestants.

Since the big boy was the first baby, it is possible that the cat resented the way he stole the limelight. In a childless house, the cat was a pet. After baby-number-one arrived, the cat became more like a mobile piece of décor. The squeaky, helpless, crying wheel got the grease, and the cat got to make adjustments in his expectations. This may have soured the cat on the idea of human babies. The baby’s herky-jerky, heavy-handed flailing may have played a role as well. We’ll never know for sure.

Baby-number-one and the cat had their rare, sweet moments, but these were mostly when the baby was very drowsy or already asleep. The two of them were never best buddies.

Baby-number-two has taught the cat a lesson in demographics. Mr. Cat is outnumbered now, and since he hasn’t had all of his man parts in more than a decade, and there are no eligible bachelorette cats in our house anyway, he’s not likely to roll back the tide. Facts are facts.

To his credit, the cat has adjusted to his changing world. He has reached out to this new baby in an effort to mend fences with baby-kind. He flops down beside the baby and allows himself to be petted, if petted means having little fistfuls of his fur grabbed, his tail tugged, and his ears pulled. All of this is a form of attention, and the cat has come to appreciate that.

The cat also understands that this baby means no harm. He has a lighter touch than his brother did and that probably helps. If his grabby style of petting hurt the cat, the cat likely would not keep eagerly subjecting himself to it. But it doesn’t hurt, or at least it hurts better than nothing.

Their relationship is not all sunshine and lollipops, though. They’ve had their spats. One time the baby must have tugged upon the wrong piece of cat, because the cat had to yell at him. “Stop it! That hurts!” the cat said. That’s what I think he said, anyway. It was in cat language. It sounded mostly like “Rrrairrrlw!” but I think my translation is pretty close.

The baby cried after the cat scolded him. His feelings were hurt. He was only trying to play with his friend.

Another time I warned the baby in a stern voice not to tug the cat’s leg like he was. I was hoping to avoid another cat-yelling incident. I did avoid it, but the baby cried at my warning anyway. He’s very sensitive about his cat.

It’s tough when all you want to do is play with your best buddy and all it does is get you yelled at.

12 comments on “This tail was made for pulling”