Now that my son brushes his teeth by himself, I think nostalgically about what he used to say whenever he reached some developmental milestone. When congratulated upon his accomplishment, his eyes would beam pride and he would say, “I’m getting a big boy.”

The words, “I’m getting a big boy,” always made it sound as if he were heading down to the Big Boy Shelter to pick out a big boy of his very own. If there is truly such a place as the Big Boy Shelter, I would like to know about it, because there are some days when I would like to drop him off there. But he’s had all his shots, he’s good with children, and my wife has grown attached to him, so I guess I’ll keep him.

Of course, he meant, “I’m getting to be a big boy,” but at the time, even the simplest verb in all language, unprocessed by conjugation, thwarted him. It was nothing to be ashamed of; the same simple verb flummoxed Hamlet, and he got to be famous, in spite his inability to come to terms with it.

Contemplating basic verbs. I always do my best pondering when I’m holding my thinking skull. Maybe this guy should get one of those.

My son has since gotten to be a big boy. But big boys still have their troubles. My big boy encounters one of his most vexing troubles occasionally while brushing his teeth. This is the psychological torture caused by a dangling string of spittle.

Nine out of ten times, the boy can rinse and spit without any terrifying results. Yet, every once in a while this process leaves that tenacious thread of spittle hanging from his mouth. This is horrifying to him. He would rather examine the baby’s dirty diapers than touch a thread of saliva from his own mouth. This goes for touching it with his toothbrush as well. 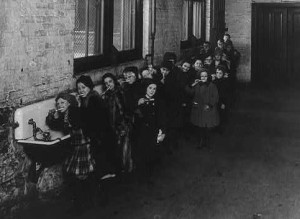 “Spittle can’t harm us as long as we stick together. Now, you boys in the back just wait patiently; the girls are almost finished and a toothbrush will come available presently.” (Image: Frank P. Burke)

Whenever his spittle clings to him, as it stretches its disgusting length toward the sink, he freaks. He makes moaning and groaning and whining sounds as he first shakes, then bobs, his head in a frantic effort to free himself of the horrifying link.

Of course I’m laughing, so I’m no help.

My laughter only makes him more furious. How would you feel if there were a rattle snake, hanging by fangs stuck into your lower lip, and your dad just stood there and laughed?

But if his spit is too nasty for him to touch, I’m not getting near it. 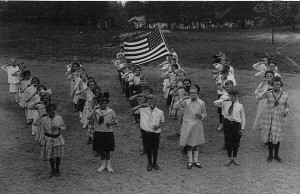 It is never too soon to learn your patriotic duty as an American to stand firm against the spittle hordes.

After about 15 seconds of a full-fledged Irish jig, the strand usually snaps off. By then, the kid is breathless and exhausted, but his mouth is safe to bring his toothbrush near again. That is, unless the strand has the unholy gumption to snap in the middle. Then the terror begins all over again. Only it’s worse now, because it’s going to take longer for this shorter pendulum of swinging spittle to build up enough momentum to break free of him.

He should have continued to leave out simple verbs and just gone and adopted a big boy to do these dangerous tasks for him. It would have been easier that way.