We intend to send our son to kindergarten in the fall. Many parents are delaying kindergarten an extra year for their kids. That’s their choice and I respect it, but the way I figure it, the sooner he goes to school, the sooner he graduates, and the sooner he can begin working and saving money for that posh retirement home his parents will so richly deserve in their golden years. Even one year of lost wages could tarnish the first-class accommodations I’m owed.

I feel like, out of all the people holding clipboards who knock on our door at dinner time, one of them should be the person who signs up your kid for kindergarten and tells you where to leave him on that fateful morning in September. So far, none of them have been that person, and I begin to fear that such a helpful solicitor does not exist. We may have to leave the house to get the boy enrolled in school, and to find out where that school is.

In my youth, there was only one elementary school in town, if you happened to live in one of the towns that was on the whole education bandwagon. As long as your parents got you to the door of that school during daylight hours, with some kind of identification tag pinned to you, you were officially enrolled. There weren’t so many forms with nosey questions about residency and immunizations. The teachers were experienced at picking out the potentially rabid, and these were set outside the classroom door to become the school nurse’s problem. Life went on without a fuss, except for the minor difficultly of having to often find a new school nurse. 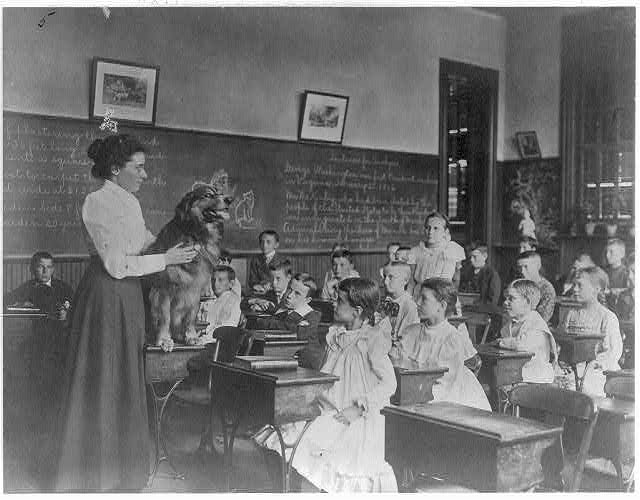 Checking the pack of new pupils for signs of hydrophobia and ticks. (Image: Frances Benjamin Johnston)

There are several elementary schools in our district. I’m pretty sure our boy will go to the nearest one, rather than the one whose data entry person picks our packet out of the stack. I found a map and our house is in the area outlined in blue marker, so I think that means our son will attend the blue area school.

I went to our district’s web site and opened up the enrollment form. I scrolled all the way down through the many pages of forms until I hit the Acceptable Use Policy. Somehow, I doubt that my son will be running an online dating site from the PC in his kindergarten classroom. He’ll bring his own laptop for that.

I finally had to navigate over to espn.com and take some deep breaths to stop the hyperventilating. Why do they need to know more about my kid than I do? Now I’ve got research to do. Maybe I’ll Google him. I wonder if he’s got a Wikipedia page.

It all seems kind of daunting and confusing right now, but I expect we (my wife) will figure it out by autumn. If not, the boy will be another kid whose advent into kindergarten will be pushed back a year. That wouldn’t be so bad except for the dent it will put into my retirement plans.

12 comments on “If I can’t find your kindergarten, you’ll have to be homeschooled”

Tombs of the ancient dreams