Back when we first moved into our house, and I was trying to build a garden that wouldn’t be raided by wildlife, people told me: “Plant tomatoes. The animals won’t touch them.” I didn’t plant tomatoes. I don’t like tomatoes. I like lots of things made from tomatoes: pizza sauce, tomato soup, marinara, but an actual tomato has just the right texture to make me flinch when I bite into it. I’m a freak, I know, but there’s just something about the feel of a tomato that makes my tongue want to retreat down my throat.

Instead, I spent lots of time fortifying my garden. The effort paid off. I made my garden impervious to rabbits and groundhogs, etc., just in time to abandon gardening in order to take up the hobby of raising children. Through all the years my garden lay fallow, I took pride in knowing herbivores could not get at the various weeds filling the space.

This year, my wife took an interest in gardening. Men familiar with wives will understand this means she did a lot of pointing while I did an equal amount of digging around in dirt. The pointing was crucial; without it, I may not have understood which dirt I was to play in.

In our refurbished garden, we kept it simple, planting only cucumbers and peas. The cucumbers went wild, overrunning the peas as well as the garden fence. It’s a good thing we didn’t plant tomatoes in there; they wouldn’t have stood a chance against the invading cucumber hordes. 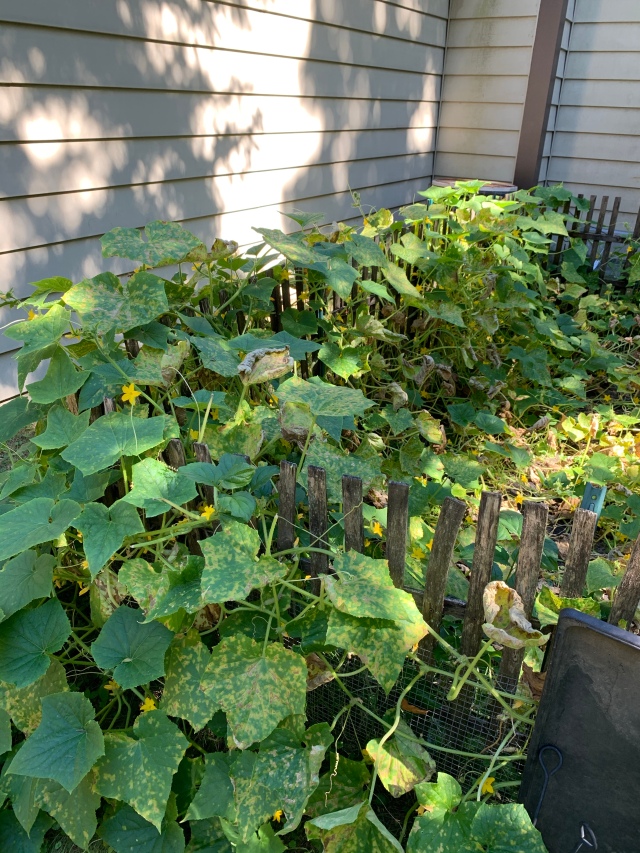 Cucumber plants going over the wall to carry their conquest into the back yard proper.

My wife likes tomatoes. She likes them a lot. So, we planted some tomatoes in a pot on our deck. They prospered well, until the fruit started to turn red. Then we began to find bites taken out of them. The Internet cast the blame at squirrels. The Internet casts blame for a lot of things at squirrels. I’m sure some of it is justified, but I bet some of it is thrown at them based solely upon reputation. Squirrels have a PR problem.

I wrapped chicken wire (or as the chickens prefer: flightless bird wire) around the pot. The depredations continued unabated. A friend suggested it must be birds attacking our tomatoes, but I’ve seen the mouths on the birds around our place and I doubt they’d leave teeth marks.

One day I noticed movement inside the wire. As I came closer, the movement noticed me. Up the wire scampered a dirty little red-faced chip monk. He leapt from the wire to the deck railing and was gone before I could do more than stomp my foot and yell at him to get a job.

What a nice chap. He left half of the only ripe one for us.

We slid the pot away from the railing and removed the accommodating wire. The thievery continues unabated.

To date, the tomato arithmetic has worked itself to a ratio of one tomato for us, one tomato for Chip. I guess that makes us Nature’s perfect socialists.

22 comments on “Grow tomatoes, they said”