When you’re very young, many things confuse you. Over time you change and you begin to understand more and more until you hit the prime of life, that fleeting moment when you understand as much about the world as you are ever going to. For that split second, you are in the grove, a knower of things, wise and worldly.

Then the world changes, and you understand less and less. Green reality turns to brown, dries to a brittle sheen, and floats away on a chilly breeze. All at once you are old.

There are many things I no longer understand, but that which most recently warned me of my slipping mental grasp is stripes.

I didn’t understand stripes in my youth either. Circa 1971, my parents dressed me in a polyester shirt of many discordant, horizontal stripes, sporting a zipper V-neck with a metal hoop pull tab. I never figured out why. As I grew up, I discovered horizontal stripes look best on flags, while slim, sparse, vertical ones are better for fashion.

I thought I’d made my peace with stripes until our visit to the local art museum this past weekend.  The horizontal stripes were back, bigger and bolder than ever.

Even on my peak day in this world, I would not have presumed to understand art. My peak day is farther behind me than I realized. There are two huge rooms of stripes, and nothing else.

Hover over photos to see captions.

Please let there be an entire other room of this!

I probably ruined the soup by adding children.

My wife asked the docent about the fabulous stripes. What I got is second-hand, but the upshot is the courageous artist freed us from the bondage of needing anything more than big stripes on big canvas to be aesthetically fulfilled. Perhaps this explains the tingle of aesthetic liberty I’ve been experiencing all week.

If only it were just the stripes conspiring to age me. There was also this. 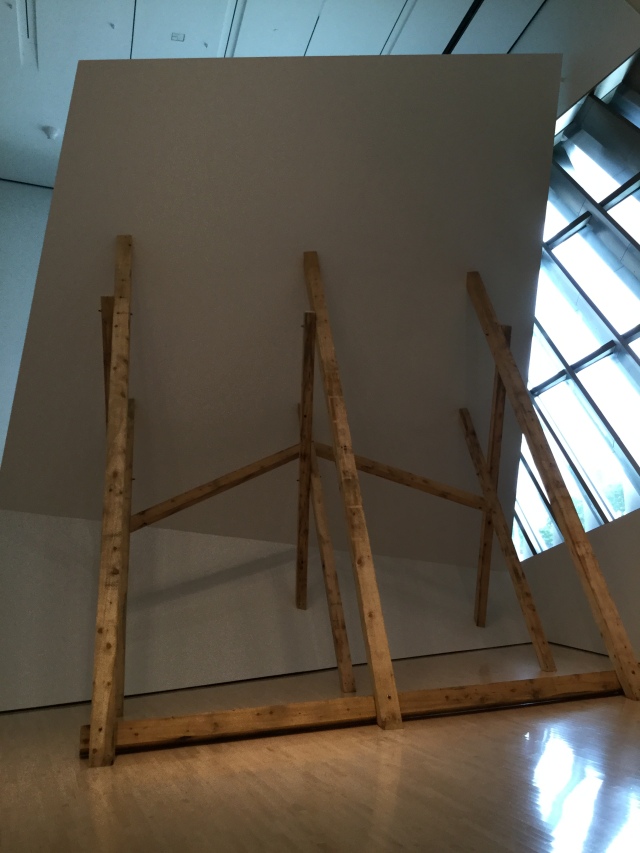 Walls just don’t collapse the way they used to.

I roused the courage to ask the docent about this one. “It’s a falling wall,” she told me. I didn’t want to upset her, so I didn’t point out it wasn’t actually falling. There was more timber holding up that wall than the non-falling walls all around us. Maybe they were just supporting it until the crowd got there. I suppose you don’t want to advertise a ground-breaking Falling Wall exhibit and have all the latecomers be disappointed by a run-of-the-mill Fallen Wall exhibit.

Also in this gallery were two projector lamps projecting nothing but light onto the walls. The docent confessed the projector exhibits were open to interpretation. The boys interpreted them to mean they were to make shadow puppets on the wall. Some of the hand gestures were very artful.

We didn’t have time to view the rest of the museum because my family had to rush me to the Home Goods section of Target so I could flip through framed prints before I started shaking my cane and shouting demented gibberish at our brave new world.