Every night, I read the big boy a bedtime story. This tradition dates back to the time even before there was a little brother, an era that seems ancient. It’s not so much the story that matters as it is Daddy sitting on his bed reading aloud to him.

Back in the day, he liked a particular Thomas the Tank Engine book called, Thomas and Percy and the Dragon. It’s a Beginning Readers book of about 20 pages that is not flattering to Percy’s reputation, but then Percy does have his issues.

I read this book nearly every night, to the point where I had the dozen words on every page memorized. In a misguided effort to illustrate that we were perhaps overusing this book, I began reciting the story to the boy while looking at everything in his bedroom except the book. 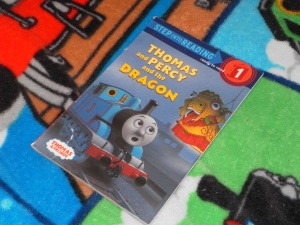 Daddy is so well read – he can quote the classics from memory.

I turned the pages on cue and recited the appropriate text while staring into the boy’s face. This effort to prod him toward fresh literature completely backfired. Thomas & Friends were doing comedy now, and he loved it. “Look at the page!” he would demand. I would sneak a peek at the book and quickly turn my gaze back at him, eliciting a stream of giggles.

One day, someone gave us a big, hardcover book about animals. I started reading this at bedtime. There was lots of information to digest, so we fell to the rate of one page per night. Sometime between the hyenas and the sharks, his little brother was born.

When we finally finished with the animals, someone gave us a big book of facts. Some of the concepts were over his head, and I’m sure he never wondered why Secretariat was such a fast horse (he had a freakishly oversized heart), but it was our thing.

I hesitated to continue some nights. I wasn’t sure he needed to know about Shakespeare yet. I hadn’t learned to run screaming from that name until ninth grade. Probably he was too young to foresee the terrible psychological scars The Bard will inflict upon his teenage years, so he didn’t flinch.

Eventually, his little brother joined our story time. The little boy doesn’t care about racehorses or playwrights. He wants only to grab the book or wrestle somebody. He’s a distraction from our routine, but he’s also part of our world moving forward, as it should and must.

It took nearly two years to read through those two books full of amazing and soon-forgotten facts. Two nights ago, we closed the back cover.

Last night, at bedtime, the little boy was too busy arguing with his mother to join us. The big boy was waiting on his bed. Sitting beside him was that old, flimsy paperback, Thomas and Percy and the Dragon. He didn’t say anything. He didn’t have to.

I sat down and opened the book to the first page. I turned my face to the boy and began reciting.

He grinned as big as yesterday.

16 comments on “A smile for yesterday”