My son’s new school is about a mile away from our house. His new school is the one in which he will attend Kindergarten. He calls it his new school to differentiate it from his preschool, which was his old school.

He likes to visit his new school. There is a big playground alongside and I guess he wants to familiarize himself with all the equipment, to give himself a jump on his classmates in September. It’s important to know which is the best slide in those pivotal moments when the other children are making a confused rush toward the playground. Otherwise, you could have to wait your turn or something. 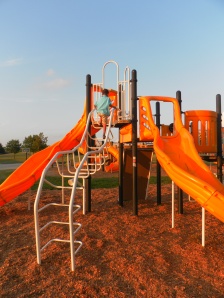 A school is only as good as its playground.

Yesterday, I was home with the boys. As a special treat, I loaded them both into their wagon and started pulling them over the long trail toward the new school. It wasn’t very hot outside, if you weren’t pulling two kids in a wagon. The unencumbered pedestrians we saw looked rather comfortable. But comfortable is a relative term for a beast of burden.

Halfway there, I realized that I hadn’t brought the little guy’s diaper bag. We had already climbed one of the two big hills along the way and I was damned if I were going to backtrack for a diaper. Diapers are subject to arcane rules of chance, mandating that if you go out of your way to have one with you, you will certainly not need it.

I discussed it with Toddler Boy and we agreed to roll the dice and keep going. Mr. Kindergartener concurred, though his vote was merely ceremonial.

At the school playground, the boys exited the wagon. I had earned a moment of relaxation, but what a parent earns and what he collects are different quantities. A four-year-old can run surprisingly fast when aimed at a slide-sprouting sculpture of yellow metal.

Practicing racing the other children to the best slide.

A one-year-old can be stopped in his tracks by an interesting array of wood chips, a used straw, an unfortunate bug, or really any number of common things seen under the new light of the playground.

A piece of mulch unlike any other.

It is no time for relaxing when one must herd the cheetah and the sloth into the same swath of savannah.

Our play time was limited. Building clouds made a storm appear imminent, and a toddler always makes a storm imminent when he lacks fresh diapers.

As I built up a nice froth pulling the boys home, my son said, “Daddy, I’m not sure I want to go to Kindergarten.”

This was unusual. He’s been excited about it so far. “Why not?” I asked.

“I don’t know if I want to follow all their rules.”

This is a boy after my own heart. Many times I have contemplated calling my supervisor: “I won’t be in today because I don’t think I want to follow your rules. You’ll see me when I’ve developed a better attitude.”

I couldn’t argue against his point, so we went home.

The dismal house of rules just beyond the playground.

My wife got home soon after. “Guess what we did?” my son asked her. “We walked to my new school.”

I let it go. Mom was home now, so I could grab a few minutes to myself to relax. I did what I normally do with these precious moments. I went outside and mowed the lawn.