My son graduates from preschool today. There is a crusty old man inside of me who finds that concept ridiculous. When I was young, we didn’t graduate anything until we graduated from high school, and the high school graduation ceremony was merely our parents’ way of telling us that our old bedrooms were being repurposed. It was time to go to college or get a job.

In the preceding years, we’d moved from one grade to the next without any discernible pomp. We didn’t celebrate the transition from elementary to junior high. Mostly we feared it. Our junior high was mixed right in with the high school. That meant there were a lot of big kids in that building, and since they were huge, they were probably mean as well. Also, there was Algebra waiting to beat us up. Nobody wanted to have a party about that.

My wife asked me if we should have a graduation party for our son. I said no, quickly and emphatically. It’s not that I don’t want us to celebrate this event, I just think we should celebrate it privately. Even the crusty old man in me agrees that this is a milestone that we should acknowledge. This year has been an important first step for the boy. Yet, I don’t want to blow it out of proportion and let him believe that he’s some kind of hot shot or that he’s forever entitled to special praise because he finished a program that had a 100% graduation rate. For Pete’s sake, he didn’t even have to pass a final exam. 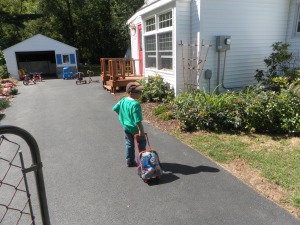 Back when he was just a little guy, on his first day of preschool. It seems like only nine months ago. *Sob* *Sniffle*

But the main reason I discouraged my wife from throwing a party for the child is that I don’t want her to become the parent that all the other parents secretly despise. So far, I have not heard of any other graduation parties associated with my son’s preschool. This fragile, unspoken truce between parents seems almost too good to be true. I’m on pins and needles waiting for that one overzealous parent to ruin it for everyone.

It won’t be my wife though. Not if I can help it. The constant stream of birthday parties is quite enough. I’m about ready to take out a second mortgage so that I can afford all the birthday presents my son has given to four and five-year-olds in the past year.

Know that I love children. The kids at my son’s school are great. They should party like zoo monkeys on their birthdays. But that’s enough.

Once one parent cracks, and gets the great idea to throw and whoop-de-do preschool graduation shin-dig, dominoes will fall. Other kids will need parties. Soon, the whole town will be aflame with the glow of half-pint accomplishment. A whole year’s worth of birthday parties will be replayed, squeezed into the span of two weeks. And no one will forget who is to blame for this.

It won’t be us. Our family will be celebrating over a tray of McNuggets.

Congratulations to all of this year’s graduates – from preschool on up. Party like it’s some far-away-sounding future year that will be long into the past before you know it.

26 comments on “As you embark upon your journey through life, don’t forget your Lunchables”