Some things are more enjoyable when done with one’s children. Being sick is not one of them. You can hardly enjoy being sick at all when your kids are sick too. It just about ruins the whole experience.

On our first night of family illness, I let my son sleep in the bed with me. His mother, who was slightly less ill, and exceedingly more wise, than his father, opted to sleep on the couch. She made a speedy recovery.

A sick four-year-old in your bed is a sprinkler system for germs. Even though my son covers his mouth during waking hours, he made no bones about coughing directly into my face in the bed. Rolling over saved my face, but it did nothing to prevent his charming little sneeze droplets from alighting upon the back of my neck. I also discovered that, even in the throes of illness, I can be remarkably nimble when it comes to dodging  puke.

Sick children need their juice. They need it now and they need it where they are. Sick parents might have very wobbly legs, but that is no excuse for not crossing the room to slide a boy’s cup of juice two inches closer to him so that he does not have to roll over to reach it.

Sick children have a great many needs, none of which will wait until Daddy is feeling just a little bit better. I feel fortunate that Mommy was able to tend to the sick infant’s needs without much help from me. This left me free to attempt to keep my legs under me until the preschooler had all of his needs met, or until he realized that I wasn’t trying to cough up a lung just to mock him. 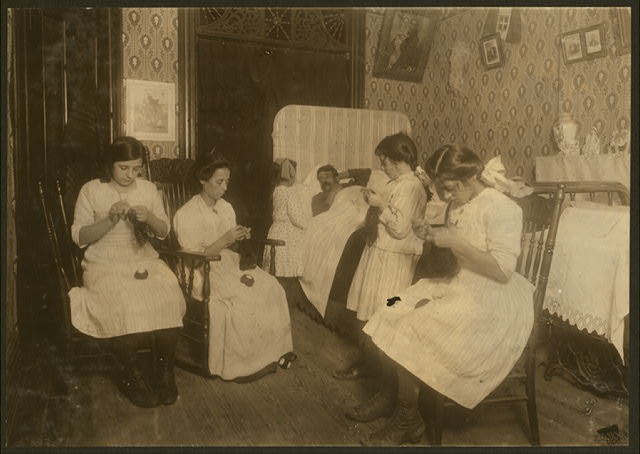 In olden times, when the father got sick, the children busied themselves knitting warm garments for him instead of tormenting him with their sundry juice requests.

He got better quicker than I did. This was a relief; all of his sick neediness was replaced by healthy neediness. There were lots of Christmas toys to be opened. Just getting the modern toy out of its box is a half-hour, labor-intensive process, requiring no less than three separate tools. Rescuing toys from their intricate webs of packaging is one of the primary reasons why dads exist. I was happy to help my son liberate his toys, from where I lay on the floor, even at the risk of falling asleep with scissors in my hand.

Both of the boys are well again. I am nearly so. For their sakes, I hope I get back to 100% very soon. It is an unfairness to them, having to jump and climb all over a chronic complainer who is forever whining about not feeling well enough to take a sharp knee in the gut.

6 comments on “Can you crawl to the kitchen and get me some juice?”