The other day, we went to a festival with exhibits from countries all around the world. We went, not because we are a particularly cosmopolitan family, but for the same reason we go to the apple butter festival: it was free. Being the most provincial family member, I’d probably skip all such festivals in favor of watching football from the couch if I didn’t have a wife handy to stress the importance of free events, but that’s another story.

At the festival I won a prize for transferring three M&Ms from one dish to another with chop sticks, within the span of 15 seconds. I had hoped the prize would be more M&Ms, because my great triumph had left me peckish. But the guy in charge of prizes reached under the table and from there produced happiness, which he handed to me.

It was a folded, red piece of paper, cut into the shape of the Chinese word for happiness. This is what the guy said; for all I know it could be the Chinese word for sucker, but I am placing my faith in happiness. Unfolding the paper produced a duplicate image of the word, bringing me double happiness, or perhaps making me sucker twice over.

As one who values happiness, and is also a bad ass with chop sticks, I carefully kept my folded paper safe for the remainder of the event. Though other handouts might get crumpled in the glove box of the baby stroller, I guarded my special paper and got it home safely.

At which point, our four-year-old got hold of it. I was watching highlights from the lost day of football games when he showed up with my happiness in his hands. He opened it up and put it over his face, peering through some of the holes. “Look, it’s a mask,” he said. 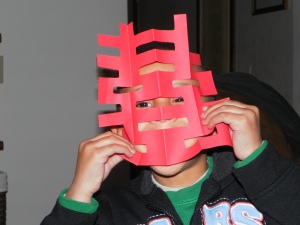 Hiding behind the veil of happiness. There is no mouth hole for him to speak through, so maybe this represents a few minutes of parental happiness after all.

I did not remind him that his history with masks is not a happy one. Rather, I said that it was not a mask and asked him to be careful, as it took uncommon skill to win such a prize.

“Okay,” he said as he refolded it. “What happens when you hit somebody with it?” He began whacking me over the head with my own happiness.

“Stop it,” I commanded. “You’re going to break my happiness.”

I gave him a look that communicated ideas completely opposed to happiness. He returned a clever look that said my happiness was growing tiresome to him anyway. He attempted to toss it down upon the coffee table, but it floated off course and landed beneath the table. As long as it was out of his destructive hands, I was satisfied.

I got lost in my highlights and forgot about my happiness. As far as I know, my happiness is back where it was born: underneath a table. If you are searching for happiness, that might be a good place to look. 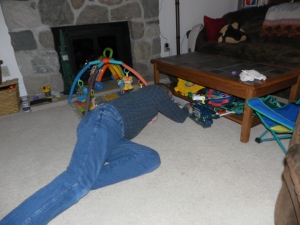 Searching for my happiness. It has to be under here with all of our other toys.

15 comments on “Quit clobbering me with happiness!”