Last spring I used this space to document some of the noteworthy discoveries we made at our local zoo. A few days ago, we paid the zoo another visit. This is an updated report about the goings-on there. Click here to see the original report.

The Bald Eagle is still not bald. If anything, his hair is fuller and wavier than ever. This debunks a theory I had that maybe his name was just a little off and he was merely a Balding Eagle. In this theory, time would eventually catch up with him and we would find him straining to catch hopeful glimpses of the crown of his head in a mirror. 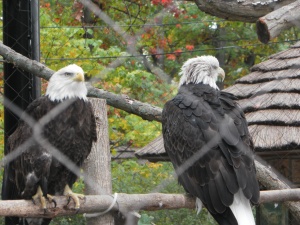 He’s retired now, but the guy on the right used to make good money singing “If you want my body, and you think I’m sexy . . .”

This theory is now destroyed. His coiffure is more lush than ever. He seems to take pride in letting it flow freely in the breeze. Good for him. After his brilliant victory over endangerment, he deserves to flaunt his endowments.

Right down to the bridge of his nose – how’s that for a non-receding hairline?

The tortoise is suspiciously absent from his pen. I wouldn’t be surprised if he has made a break for freedom and is most of the way to Mexico by now. When you are as deceptively quick as that tortoise, you will eventually get your opportunity to fly to your dreams. Vaya con Dios, Speedy!

After a long summer’s nap, the hares have roused themselves into a state of semi-consciousness. A combination of cold weather and general itchiness has caused them to rage against their natural lethargy long enough to change positions in anticipation of their long winter’s nap. When they receive the tortoise’s postcard from Acapulco, explaining that he couldn’t take them along because they stood no chance of keeping up with him, they may regret their laziness, but I doubt it. 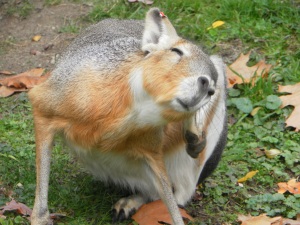 If hares sang the blues, it would sound like this: “Woke up this mornin’, scratched my ear, and I lay back down.”

Four-year-old boys are just as fascinated by trains as three-year-old boys were. Though zoo animals will always be mildly interesting, they will never be trains. When a train passed on the tracks beside the zoo, we overlooked the Yak and watched the main attraction. The Yak shouldn’t take it personally. Last time it was the meerkats who got overshadowed by the train; next time it could be the lions. 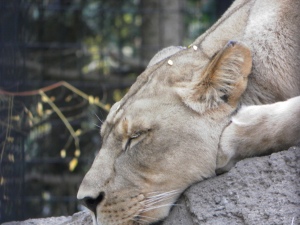 “Go watch a train or something, kid. I’m trying to get some rest.” 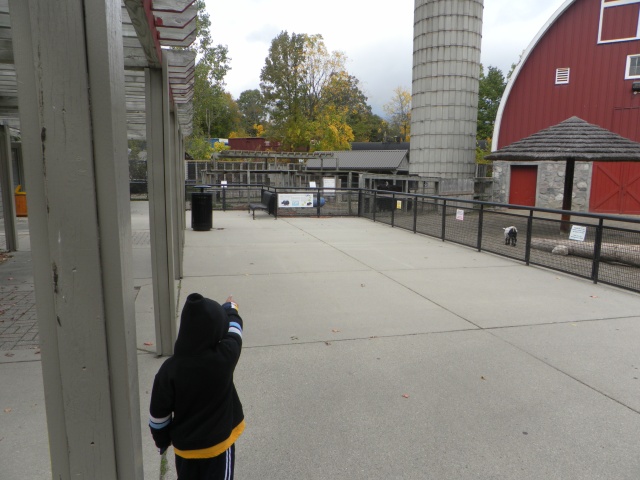 Here’s the boy, making sure we all look at the train passing behind the farm area. That black blob in the center distance is a Yak, which might as well be invisible when there is a train passing.

If you can stand the chilly weather, a brisk autumn day is a great time to visit the zoo. There aren’t many people out, so you can get around very quickly, and the kids don’t have to squeeze in front of taller spectators. Our four-year-old enjoys visiting the zoo when it’s not crowded. He loves going to the zoo to see the trains.