One of the toys that has been passed down from the first son to the second is a baby activity exersaucer. You lower the baby down into the cockpit in the middle of this toy. He can then turn himself around and play with any of the myriad interesting toys on the circular, outer ledge.

Multitasking: picking out some music to enjoy with Mr. Sunshine.

I like this toy. It can buy a busy parent up to 15 minutes of baby-free, two-handed productivity. In 15 minutes, the baby will realize that the outer ring of toys is not really that interesting after all. The baby will begin to wail his head off for someone to come extract him from a device he now considers little more than a psychological prison.

But that 15 minutes is golden. 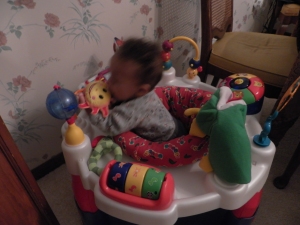 Lunging to give Mr. Sunshine a kiss – or bite him. With that new tooth running the show, you never know what that little mouth is going to do.

One of the toys on the outer ring of our saucer is a group of large buttons with an image of an animal on each. Every time one of these buttons is pushed, the device says a word, or makes a noise, associated with the pictured animal. If the baby is successful in pushing one of the buttons four times in succession, he is rewarded with a snippet of classical music. The one exception to this is the cow button, which plays Old MacDonald, as if the designers could not find a fifth piece of classical music in the public domain. 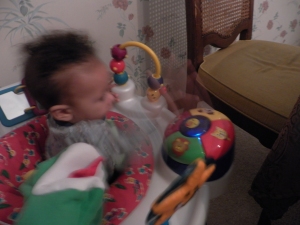 That blur in the middle is the baby’s arm beating on the music player in a fit of classical music dance fever.

The baby, like is brother before him, really enjoys hearing the music. He smiles and swings his arms. The selections are quite lively and melodic, excepting, of course, the insipid Old MacDonald. In fact, the whole family enjoys these bits of music, especially Big Brother, to whom, it seems, they bring back the pleasant memories of his own distant youth.

One day, the baby was pounding away on the cat button when we were all rewarded with the inspired notes of Beethoven’s Fifth Symphony. Big Brother’s eyes lit up. “I know that music!” he shouted with glee.

It warmed a father’s heart to know that this timeless melody had stayed with him through the years. Maybe he would develop an aptitude for music. Maybe he would become a great musician himself – our own little prodigy.

10 comments on “Name that tune – the home edition”