What would a four-year-old most like to do for fun on a beautiful Saturday afternoon? You guessed it: wash windows.

My wife and the baby were out when the boy came to me and asked, “Can we do some housework? Let’s wash some windows.” He then went on to tell me, “We’ll need a bucket and some soap and water.”

No, the boy is not the reincarnation of my grandmother. He really couldn’t care less if our windows were coated with gook. This sudden desire to clean up is not about windows or good housekeeping at all. It’s about toys.

The boy has noticed that there are lots of shiny new toys in that wonderland warehouse known as TOYS R US. Except for some of the toys in the aisles that virtually glow with pinkness, he wants them all. At the rate his parents buy him toys, he has calculated that it will take him months, or even years, to collect them all. This is unacceptable.

If you hire a four-year-old to clean your windows, make sure you have plenty of Windex, because the spraying is a lot more interesting than the wiping.

Our three-seasons room has lots of windows, and though I was in no hurry to clean them, it seemed a good opportunity to reinforce his work ethic. This could be done just as well with a bottle of Windex and some rags as by schlepping around a bucket of dirty water. We went to work at once.

He was able to reach only the lower part of the windows, leaving me responsible for the rest, for which my only reward would be cleaner windows. The boy kept himself motivated for a while, but his interest waned by the time we got to the outside. “You’ve got to finish the job if you want to get any money,” I warned him.

“Well, I don’t want to be in a mentoring program.”

This was an out-of-the-blue head-spinner. Then I realized that the reference was from one of the inappropriate cartoons we like to watch together. As I recall from the cartoon, a mentoring program entails a slacker employee carrying his mentor, in a harness resembling a Baby Bjorn, while the mentor barks commands at him. I don’t want to be in a mentoring program either.

The boy stuck with it until the job was done, perhaps motivated by the image of a nagging father strapped to him. I gave him two dollars to put into his wallet and two quarters for his piggy bank.

“Can I have two of the dollars with Mr. Lincoln’s picture on them?” he asked.

“These have Mr. Washington’s picture. He was a very good man too,” I explained.

“Yeah, but Mr. Lincoln’s dollars have fives on them. These only have ones.”

Next time he wants to earn some money, I’ll have him do my taxes. 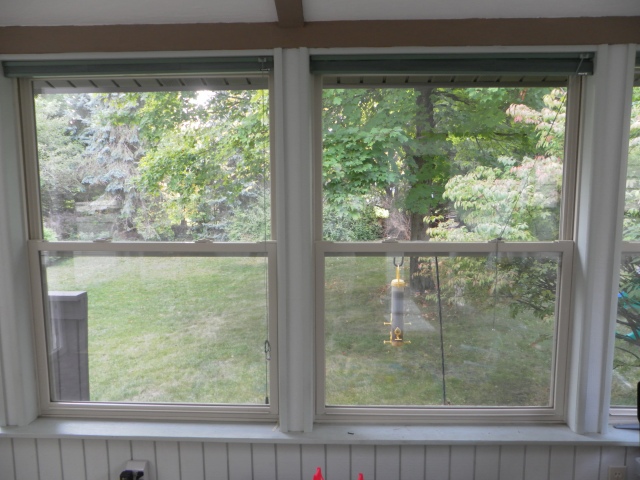 Thanks to a boy with an ambition, we have learned that there is a back yard beyond our windows. Who would have guessed there was anything so useful beyond all the dirt and grime?

2 comments on “Will work for toys”