Our eldest is beginning an after school German class today. This is not the sort of news that normally makes one reflective, but here I go anyway.

In the imperfect world that formed me, my father did no such thing. He was a teenager during the Second World War, living in the USA and speaking German as smoothly as his immigrant parents. Not surprisingly, something in that combination convinced him not to speak German to his children.

I took German as a freshman in college. It was either a language or Math, and I felt done with Math. I picked German. Maybe something in my genes would mold it to my tongue more securely than the high school Spanish that had always merely swilled about in my mouth before dribbling down my chin. 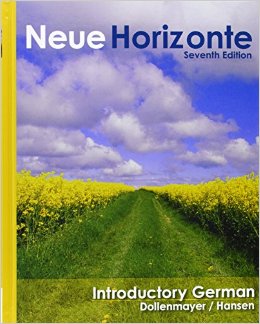 The edition I used didn’t have such a lovely cover, which is probably why I wasn’t inspired to do better in class.

In fact, I was a pretty lousy student overall.

As the undergraduate years rolled by, it became clear that I was a poor classroom learner. Yet, for the very best of reasons (I couldn’t find a job), I attempted graduate school.

Graduate school taught me only one thing: there is nothing like higher education to suck the life out of a subject matter you love (or thought you loved).

I thought I loved History, until I tried to pursue it as a graduate degree. Apparently, it was something else I loved, an academic Cyrano de Bergerac, hiding in the bushes, feeding enchanting lines to the deceitful mouth of History. History itself is mind-numbingly boring; they taught me that in one semester of graduate school.

Since I’d learned everything I needed to know about History, I determined I didn’t require more than one semester of grad school.

That was the end of my formal education in German or Math or History or anything. Abrupt, but okay for a rotten student.

My son is excited about his German class. I hope that excitement lasts. I hope he’s a good student. I hope he inherited his mother’s love for school.

I hope he goes on to become much more than a grad school dropout who can’t even speak German.