When I was in little league, I got a colored T-shirt with a stenciled team name on the front and a cap with a solid color in front and white mesh on the back (the kind farmers wear when they are out combining corn).

Baseball has come a long way since then. Big Brother’s team has jerseys with numbers, baseball pants, socks, and caps with real Major League logos on them. Parents pay significantly more for sports leagues now than mine ever did, so I guess there should be more stylish outfits to get dirty.

This is Big Brother’s second year in a kid-pitch league. The kids pitch to opposing batters, unless it takes more than five pitches to get the batter out, in which case the coach finishes him off. Elementary school boys are not the most accurate throwers, and there are no walks issued, so this system keeps the game from bogging down into a wild-pitch duel.

Big Brother has a strong arm, but like all the elementary school boys, he has some control issues. Most of these stem from his fear of hurting the kid up to bat. He can throw a number of good strikes during warm-ups, but when a kid steps into the batter’s box, Big Brother’s head fills with images of hardball carnage leading to predictably wild results. As he explained it himself: “I’m a good pitcher as long as there’s no batter.”

Baseball can be a cruel and ironic game. 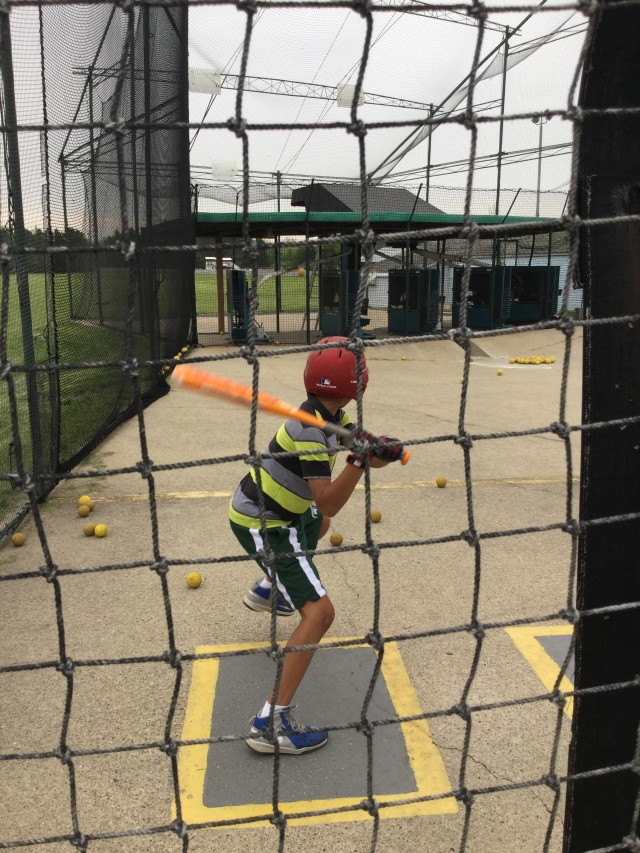 Getting in some batting practice from a pitcher that probably won’t bean you.

Kids need to face their fears, so he was scheduled to pitch the first two innings of their opening game. He nailed the first batter in the back. The boy lived, and after wiping a few tears, even trotted down to first base.

I wouldn’t have wished Big Brother to hit a batter, but in the long run, it may have saved future batters from pain. Big Brother realized he wasn’t likely to kill or maim another kid with a wild pitch and stopped worrying so much about it. He relaxed and recorded a couple of strikeouts in two scoreless innings on the mound.

The flip side of this fear is getting hit with a pitch while batting. In this case, fear hinders a kid with a good swing from playing up to his potential. Somehow, I don’t think getting nailed by a pitch will help him relax, so there needs to be an alternate solution for this.

It’s difficult to be a good hitter when you are leaving your bat on your shoulder until you determine whether or not to duck. He needs to learn the mechanics of hitting in the proper order: step into the pitch first, then assess whether you need to dive out of the way. That way, if you are not ground zero, you still have a chance to contact the ball with the bat.

It turns out hardball wouldn’t be nearly so complicated to learn if it weren’t for the hard and the ball.

30 comments on “Field of painful dreams”