Back when I was a fresh college graduate, and lived in that special, naïve bubble that only fresh college graduates inhabit, I took my shiny Telecommunications – Emphasis in Video Production degree to Los Angeles. I had done well in school, so I would certainly be directing The Tonight Show within the blink of an eye.

I learned a lot in L.A. I saw things that were an eyeful, and then some, for a callow country boy. But the most important thing I learned was that I was unemployable there in my chosen field. Somebody with the authority to say so was kind of enough to tell me that straight out.

Consequently, I began my post-collegiate career making minimum wage in the mall. A few months later, I landed an office temp job. After the mall, it felt like I had made it to the Big Time. 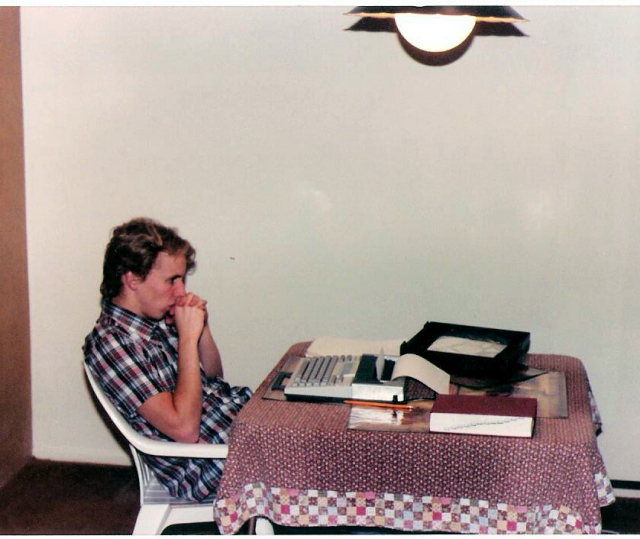 The plastic furniture of our dinner table. Many a forlorn resume was spawned at this table.

One day, when I still worked at the mall, I pulled my little car into the bank drive-through, no doubt to withdraw my last $10 so I could buy my next supply of peanut butter and bread. My car began throbbing and shaking. Having no money for repairs, I was relieved when it recovered itself. It seemed okay on the way home, allowing me to hope its mysterious ailment could be managed on the cheap.

At home, I turned on the TV and sat on the stack of foam egg crates my roommate and I used as a couch. There was a Special Report on TV about the earthquake the city had just experienced. As I watched footage of smashed pasta sauce jars in a local grocery, I realized what I felt at the bank was an earthquake. I was ecstatic. It wasn’t anything serious, like car trouble; it was only an earthquake.

It was a mild quake by California standards. The “World Series” quake in San Francisco a few weeks later proved that. I felt only minor rumbles during the year it took me to decide to tuck my tail and make the long road trip home.

Now I live where quakes are rare. My Telecommunications – Emphasis in Video Production degree is as useful now as it was then. I’ll never direct The Tonight Show, but that’s okay; I’m where I’m supposed to be. I’ve got three awesome boys, and I get to spend lots of time with them because I’m not cooped up to all hours in production meetings.

And when we have that rare tremor, like we had last Saturday, do I worry about my car? Not at all. After the house thumped and the walls rattled for all of three seconds, I marched into the room where the boys were playing and yelled at them to leave whatever piece of the house they were destroying alone. 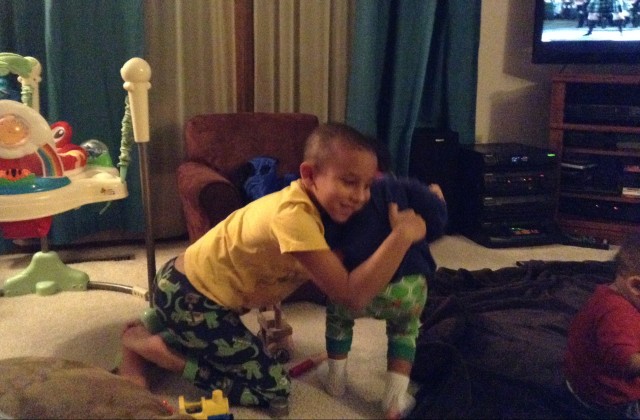 Most of our earthquakes begin with a little harmless wrestling.

We don’t have earthquakes here. Why wouldn’t I yell at them?

P.S. Sorry I blamed you for the earthquake, boys.

24 comments on “Three boys at play vs. a natural disaster: who can tell the difference?”