One Saturday morning, our kindergartener was watching cartoons when one of the toy commercials that saturate children’s programming came on. I don’t remember what the toy was, but it doesn’t matter; just as he does in response to every other toy commercial, my son told me that he wanted it. He’s like fish in a barrel to toy advertisers. They never miss him.

This commercial must have made the toy look exceptionally fun, because the boy added emphasis to his desire. “Daddy, I want that really badly,” he said.

His statement left me with mixed feelings – not the part about him wanting the next random toy that was advertised. I know how I feel about that; I don’t like it.

My mixed feelings were about his word usage. At first, I was pleased at his understanding of the adverb form. I was happy that he didn’t say, “I want that real bad.”

I could only afford to be impressed for a moment, though, before the word really began raining on my parade. Really is most often a wasted word. We all, including me, use it too much. Nine times out of ten, it adds nothing to the sentiment. “I want that badly,” would have conveyed the depth of his desire just as well. Omitting really doesn’t make me think he wants it the opposite of really badly; I’m not left wondering if he wants it fictitiously badly.

Then, I thought about his choice of the word badly, and the clouds burst above my proud Papa parade. Adverbs take up a lot of space in our sentences without doing much to earn their place. Of the total, questionable population of adverbs, badly is a bad one. I guess it has its place in statements like: “The child expressed his desire badly.” But when you want to use an adverb to add emphasis to a desire, isn’t it better to use one like dearly?

What does it even mean to say you want something badly? 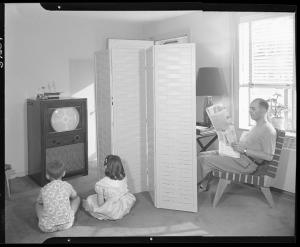 “You’ve erected a barrier between us with your constant desire for toys and your inefficient use of language.” (Image: Gottscho-Schleisner)

This is what too much writing gets you. Sometimes it brings rain to parades that should be clear skies and sunshine, as this one should have been. “I want that really badly,” is a fantastic use of language for a five-year-old. Moreover, what five-year-old is ever going to say, “I want that dearly.”? What 50-year-old says that? The only person I know who would say something goofy like that is neither five nor 50, but he reads too much Victorian era literature.

In the end, I am proud of the boy’s grammar, although I wish he would go back to his simple, “I want that,” at the end of every toy commercial. It’s concise and it will disappoint him no worse than “I want that really badly,” will when he doesn’t get the toy.

Meanwhile, I am happy that I didn’t vocalize my mixed feelings. They were misguided, and I wouldn’t like to embarrass myself speaking such unnecessary words in front of my son.

15 comments on “Should I immunize my child against the scourge of adverbs?”