In considering the traits the baby is displaying at three months old, I wonder which of them he will carry with him as he grows into a young man. I’m fairly certain that he won’t continue to view every naked moment as an opportunity to pee on whatever or whomever is within range. That could get very socially awkward, and if it doesn’t, I don’t think I want him hanging out with that crowd.

Of all the cute things a baby does, how many of them would still be cute if he did them later in life? The boundaries of cute shift over time, and there are some things that won’t be so cute down the line. That being said, he can cut out the indiscriminate peeing any time now, as that was never cute, in spite of his misguided notions.

This would not be cute in an adult

Our baby loves chewing on hands. I understand babies wanting to suckle on fingers, but he’s moved past digits. He loves to sink his gums into some juicy thumb butt. A little shank of thumb is his favorite, but he’s not above savoring a bit of knuckle or wrist when the mood strikes him. I don’t have meaty hands, but what meat I do have is, apparently, quite delicious.

These are even better dipped in melted butter.

Maybe he would chew on my ankles if I held him with my feet. Perhaps he’d chew on whatever was available, excepting, of course, my gristly, spiny shoulders. But I think he prefers hand meat, because when my hands are not available, he munches his own. His thumb is just not enough. I’m going to start wearing gloves when the teeth come.

This won’t do much for his social life

When he’s happy and engaged, the baby coos adorably. It is one of the most endearing things about him. Yet, the cooing is not going to be so cute when he’s 17. I hope he doesn’t approach the girl he wants to take to Prom and just start giving her the “ooooo, ooooo, ooooo,” treatment. Sure, it’s cute now – it’s so cute that it’s all he needs to say. But that 17-year-old girl is going to want to know when he’s picking her up, and she’s probably not going to have her hair done by ooooo o’clock. 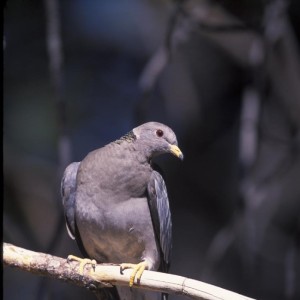 By the time he is 17, he’s going to need to be more articulate than a pigeon. Of course, I’m sure he will be, under normal circumstances. I just hope he doesn’t panic and resort to babbling random bird noises every time he comes near a pretty girl. My fear is not unfounded; there is some precedent for this kind of behavior in his nuclear family.

Babies change so quickly that I could be writing about different traits in a week. I just hope all of those future traits are contented ones . . . and none of them lead to cannibalism.