Precision is not a trait easily mastered at age three. My son has a lot of things he’d like to discuss with me, but he sometimes has trouble making me understand just what it is we are discussing. He knows exactly what he’s talking about, and it makes little sense to him why a grown man can’t follow his train of thought.

My son will ask me a question like, “Daddy, what kind of engine was pulling that train?”

Instead of just saying it was a diesel engine, like any sensible father would, I ask, “Which train?”

He’s very willing to supply details: “That one we saw the other time. The one that was on the railroad tracks.” Then, to make absolutely certain that I will know exactly the right one, he’ll add, “The one I’m thinking about.”

“Oh! That one!” I say, finally learning the first thing about becoming sensible. “That was a diesel engine.”

Often he will ask important questions from the back seat while I’m driving. In heavy traffic, he might ask, “Daddy, what kind of car is that?”

Since I never learn, I ask, “Which car?”

“The one I was looking at.”

He even points things out with the vaguest of gestures. This is not really his fault though. His mother has always tried to discourage him from pointing, since pointing can be considered to be rude in certain contexts. Instead of using his index finger to point things out, he has been schooled to use an open hand, in the same way that a spiritual guide might show the pathway to Nirvana. 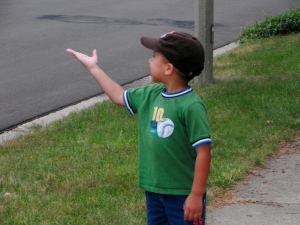 This is either the general direction of path to enlightenment or an invitation to watch a dog peeing on a fire hydrant. It is difficult to tell because neither is exactly in the direction indicated.

The boy looks like one of the apostles whenever he points at something. It tickles me, but it also leaves me wondering to what sight he is attempting to draw my attention. Open hand pointing is an imprecise art form, and its practitioners tend to turn it into a flowing gesture that encompasses up to 180 degrees of the possible horizon.

Whenever my little Holy Man points at something, I am filled with the urge to follow him toward a spiritual awakening, but I am given only a very general idea of where that awakening lies. This would be fine, as I never expected enlightenment to be an easy thing to find. The problem is that he is actually pointing at a funny-looking squirrel across the street, which I will probably also never see.

I don’t care about missing out on entertaining rodents though. My road to happiness will, more or less, be pointed out to me by the sweeping gestures of my children. 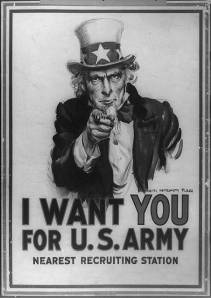 My boy wouldn’t make a very good recruiter. People would think that he was pointing at the guy standing next to them. (Artist: James Montgomery Flagg)

6 comments on “Why can’t you see what I’m thinking?”