With the arrival of the new baby growing near, I find myself harkening back to arrival of the last baby—that magical day when my wife squeezed every last drop of blood out of my hand.

It is rumored that childbirth hits the mother even harder than it hits the father. On the birthing day, it was easy for me to believe this. Later, when my wife was making plans for the next one while I was still huddled in a corner, shivering and swatting imaginary flies from my face, it seemed like maybe her scars were more physical than psychological. 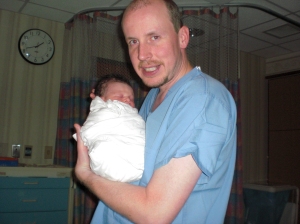 Even after it was all over, you can still see the effects of the trauma in my vacant eyes.

The pain a mother endures at the birth of her child is not to be discounted. Nor should the sights a father must bear be shrugged off as insignificant. The sounds that assail the father’s ears are worst of all. It is much easier to avert one’s eyes at a crucial moment than it is to clamp a hand over each ear. It is also more effective, and less moronic.

My big moment of trauma came at the administration of the painkillers. My wife had made the nobly ridiculous decision to forego drugs during delivery. Instead, she planned to rely upon an organic system of pain transference: whenever the pain became intense, she would grab hold of the most conveniently available part of my body and squeeze her pain away.

This plan worked through hours of contractions. Just when her Kung-Fu grip was beginning to make me resemble a wallpaper print of red hand on white background, her fingers tired themselves out. She broke down and called for the epidural.

My wife had previously instructed me on the dangers of the epidural. If they missed by just one inch with the needle, she could be paralyzed. As she explained this, she held her index finger and thumb about a millimeter apart, but she called the space between an inch because she doesn’t go in for those hoity-toity French units of measurement.

I was relieved to see two anesthesiologists enter the delivery room. Ah, I thought, they have weighed the gravity of this moment and have sent their two best men. I helped the nurse pull my wife up and swing her legs over the bed as the two men set up for business behind her back.

The nurse enlisted my help in holding my wife while the drug was administered. It would be crucial, the nurse told me, to hold her very still, in spite of her pain. Though much of the blood had been squeezed out of my arms, I felt confident, now that a team of experts had set to work around my wife’s spine. I was strong, the man of the family. If the woman could take a needle in the back, the man could certainly hold her still.

I held my wife close, pressing my head against hers. I couldn’t see what was transpiring behind her; unfortunately, I could hear everything.

What I had imagined to be two highly-skilled specialists turned out to be one full-fledged anesthesiologist and his trailing apprentice. I’d rather have had a mature second opinion in the room, but as long as there was one well-trained professional at the helm, it should be all right. I didn’t mind if the trainee stood quietly to the side and watched. They have to learn somehow, right?

I had just settled into this conclusion when their voices convinced me that the actual anesthesiologist had handed over the needle to his boy sidekick. I know these can’t be his actual words, but this is what I heard the anesthesiologist say to his little helper: “Here ya go, Skip. Why don’t you give it a whirl this time?”

I started panting. This kid’s virgin jab was aimed at the spinal cord of the love of my life. If he had acted with self-confidence, I would have made it through the ordeal. But he started right in asking questions. Again, this might not be verbatim, but when your loved one’s future is at stake, you hear “Right around this spot, maybe? This side, over here? What’s that, a bone or something?”

It’s difficult to hold someone perfectly still when you are shaking like a leaf. I was squeezing my wife harder than she was squeezing me, which is saying a lot. Why did they have to practice on my wife? Couldn’t that kid go learn someplace else?

The final straw came when the anesthesiologist coached: “No, over a little, a little more. No, that’s too far. Now, up a little. Steady.” And this part I’m not really paraphrasing. I would have protested except that there were too many black dots forming in my vision. They distracted me from what I was about to say, then they began to distract me from standing upright.

I had 10 seconds to leave my feet voluntarily, before they left me. Rather than being macho, and dragging everyone down with me, I did the honorable thing. I turned to the nurse and calmly explained, “I’m about to faint.” 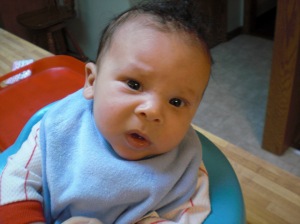 Three months later, and the boy was still concerned that I looked a little peaked.

The stalwart nurse took over my burden. I fell into a chair. Luckily, the apprentice had guessed close enough to the spot and the procedure was over. The nurse eased my wife back into bed before pushing the intercom button. “Man down. Man down,” she announced to the nurses’ station.

The outside nurse understood perfectly. “We’ll send in some juice for the father,” she replied.

Six cups of juice later, my son was born. Manly man that I am, I was back on my feet by then.