The other night, after feeling the baby in Mommy’s belly, my son came over to announce to me that his little brother had kicked him. “What?” I asked. “You two are fighting already?” I knew it would come to this, but I’d imagined that we would have peace until his brother was born. I should have known better, because if there is one thing I have a little experience with, it is brothers.

I have four brothers, three of them older. Any toughness I have in my constitution is largely thanks to them. They did an outstanding job of terrorizing my childhood toughening me up. Every charred spot on the back lawn, its black silhouette exactly matching the shape of one of my model airplanes, made me a stronger person. Every one of my toy soldiers fed to the dog prepared me a little more for the hard knocks of life. Their mangled, tooth-marked bodies were a constant reminder of the dangers of getting too close to the men.

I have confidence that my son will do a good job in teaching brotherly life lessons to his new sibling. He will, no doubt, learn a few things himself. There are a lot of useful things that brothers teach each other. If you never had a brother, you might be tempted to retreat when someone jumps out at you from a hiding place. Retreat invites attack. A brother teaches you that you should charge and punch that someone square in the middle as hard as you can. Further, you should keep punching until the threat is adequately diminished.

And they called this the brothers' war? Milquetoasts! My family could have shown these Quakers a thing or two about how to throw down.

Brothers teach each other how to sleep in defensible positions. Just because it’s dark and the house seems quiet, don’t assume that a heavy body won’t land on top of you of a sudden, pinning you down on your bed. Don’t tie up your limbs in blankets, making yourself vulnerable to attack. Keep an arm free, so you can at least get a handful of ear or something. A would-be attacker with an ear that still hurts from last time is more likely to think twice before he pounces.

I don’t envision adding three more boys to my brood, so my sons will have to work overtime if they hope to teach each other all the lessons my brothers taught me. I wish I could lend them a hand, but there are some things you can only learn from a brother. If Dad nails one of the boys in the back of the head with a snowball, it’s not so much a learning opportunity as it is child abuse.

A boy needs to learn how to anticipate an ambush from his big brother. If he has multiple big brothers, he may be fortunate enough to have this teachable moment reinforced with a second snowball to his neck. The neck snowball does not pack the same instant enlightenment as the skull snowball, but the red welt is a good reminder for up to a week. 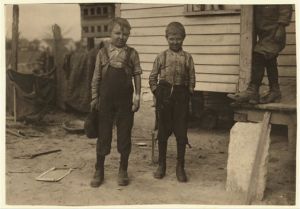 If their shirts are any indication, these brothers were out back educating each other with dirt clods. Nothing brings home an important lesson quite like a dirt clod up side the head.

My wife did not grow up with male siblings, so I’m not sure how much she knows about the educational services brothers offer each other. One thing I do know is that, in the coming years, she will find out.

7 comments on “Brotherly love: the bruise that keeps on giving”